Stories from the Bible 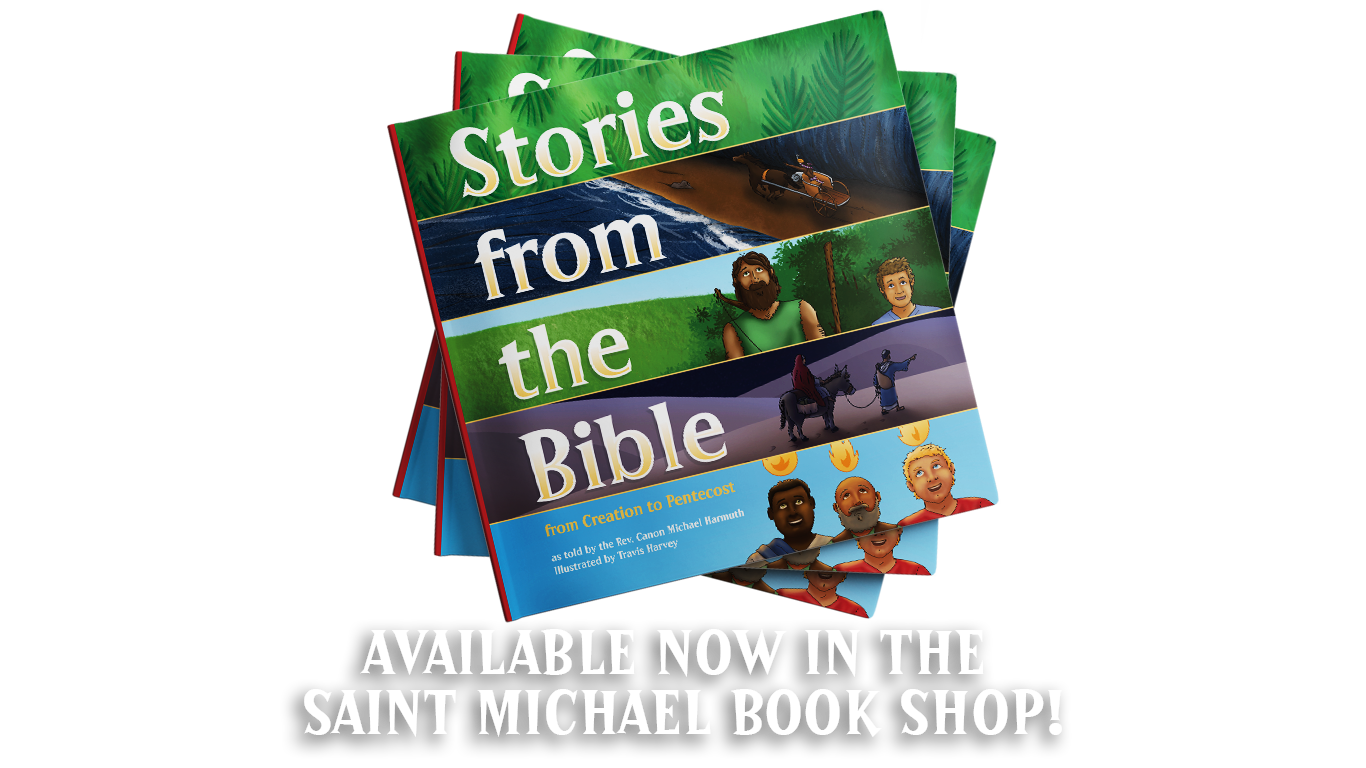 Books are available for purchase in the Saint Michael Book Shop for $24.99!

Listen to the extended play audiobook

Father Michael Harmuth takes children of all ages on an adventure through the Bible, sharing his most beloved Bible stories heard during Sunday sermons, beautifully illustrated by our own Travis Harvey with an accompanying audiobook featuring original scores by composer and Joy Service percussionist, Dr. Lane Harder!

Over the years, children of all ages have loved the special way Father Michael brings the Bible to life in our Joy Service. Now, his hand-picked favorites are collected in one illustrated book to read wherever you are, and will be released on August 14th! Join us that day for a special Joy Service at 9 am in Saint Michael Chapel, where he will read one of the stories from the book. A special reception will follow in the Parlor where he and book illustrator, Travis Harvey, would love to meet you and sign your book. Don’t miss the special audiobook with Father Harmuth telling these stories in a special way, each one with an original music score behind it by composer Dr. Lane Harder!

On the release of the Stories From The Bible, Father Harmuth says, “I loved telling the Biblical stories to children. I tried to do it in their words and understanding. Working with Justin Brooks, Steve Haal, and Travis Harvey has been a joy in producing this book. All proceeds will go to children's ministry.”

The Rev. Canon Michael Harmuth served as chaplain to the lower school of the Episcopal School of Dallas for 17 years. During his time at ESD, Michael met Fr. Mark Anschultz, former rector of Saint Michael and All Angels, who asked him to develop the existing Joy Mass. For the past 22 years, Michael has inspired leadership for the Joy Mass and shared his love of storytelling, and the gospel with many young children.

In Michael’s earlier years, he spent five years studying at the Benedictine seminary at St. Meinrad, Indiana, where he graduated in Philosophy, followed by six years at the Benedictine seminary in Latrobe, Pennsylvania, where he graduated in Theology. He was ordained a priest on May 4, 1963, and holds a bachelor’s degree in Philosophy, a Master of Divinity in Theology, and a master's degree in Parish Counseling.

Michael served on the Institutional Review Board of the Cooper Clinic. He also served the Dallas Police Department as chaplain assigned to the Northwest Patrol, Tactical Division, Helicopter Division, and as chaplain to the Dallas Division of the F.B.I. He retired as a law enforcement chaplain after 18 years of service.

In early 2022, Michael retired from regular priestly duties to pursue other forms of ministry and spend more time with his wife Marianne and their three adult children and six grandchildren.