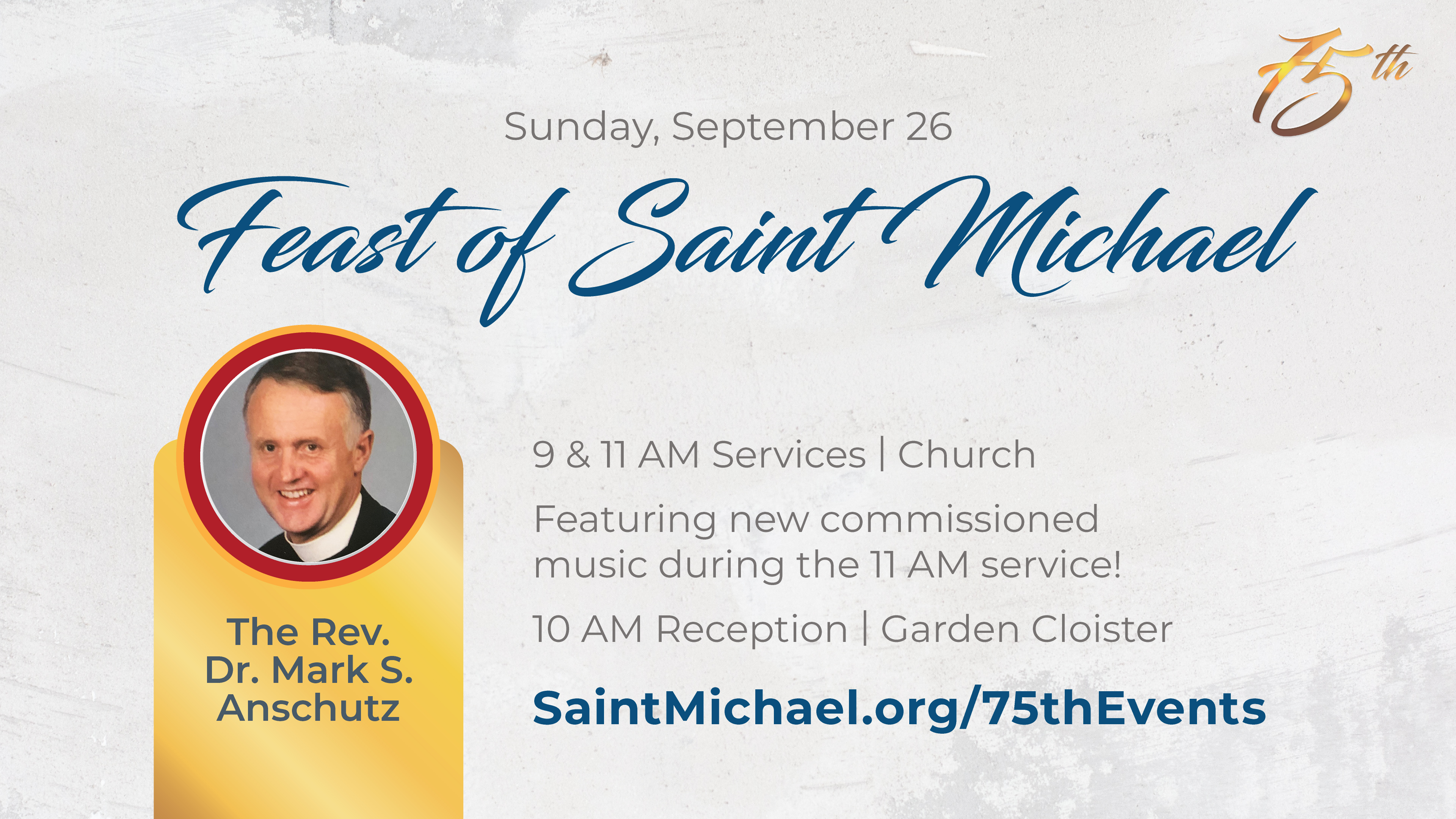 Mark Anschutz (6th Rector of SMAA) preaching at 9 & 11 AM CT (streamed here)
Specially Commissioned Music: To celebrate our church's patronal feast, the Saint Michael Choir, brass quintet, timpani, and organists will premiere no less than 10 newly commissioned works at the 11 AM traditional service (streamed and in-person) on September 26. These new pieces include a dramatic choral mass by Philip Moore, a thrilling postlude for organ and brass by Dallas's own George Baker, an exciting new choral anthem by Nathan Stang, a Psalm by Director of Music Jonathan Ryan, as well as hymn arrangements and organ music by Todd Wilson, Robert Lehman, and Angela Kraft Cross. Join us in worship to hear these premieres by nationally and internationally famed composers.

10 AM Reception (Garden Cloister): Come get your free SMAA t-shirt.

Heads up: we're altering our streaming this Sunday to make sure you can watch all of the festivities. Here's the updated schedule:

Fr. Anschutz became the church’s sixth rector on January 25, 1996. He brought a new vitality to Saint Michael as it was turning the corner on 50 years. One lay leader described him as “an idea person. He was open to a lot of things.”

An engaging, personal priest, he also brought a new informality, preferring to be called Mark. Staff members remember him as hard-working and an evangelist. In 1996, not long after Mark came, the numerical attendance on Sunday was higher than it had ever been in parish history. The balance of the debt on Spreading Our Wings, the capital campaign to build classroom space and make other improvements, was retired in 1999. The church saw a lot of action during the Anschutz era, including the expansion of overseas ministries. The Pathways to Ministry was begun, leading to the ordination of 35 younger persons who were involved. The Parish Council was reactivated, the Department of Pastoral Care established, and the Funeral Guild started.

He completed the 50-year celebrations, which included 11 cast bells installed in the tower. Saint Michael Chapel was renovated, with a new organ, bell tower, stained glass windows created by Anne Coke and Bart Forbes, and the Garden Cloister created. The first columbarium was completed and work was initiated on the second columbarium. Under Mark, the number of services expanded to include the Joy Mass, Sunday Morning Prayers for Healing, and the Saturday Candlelight Mass.

Add to My Calendar +