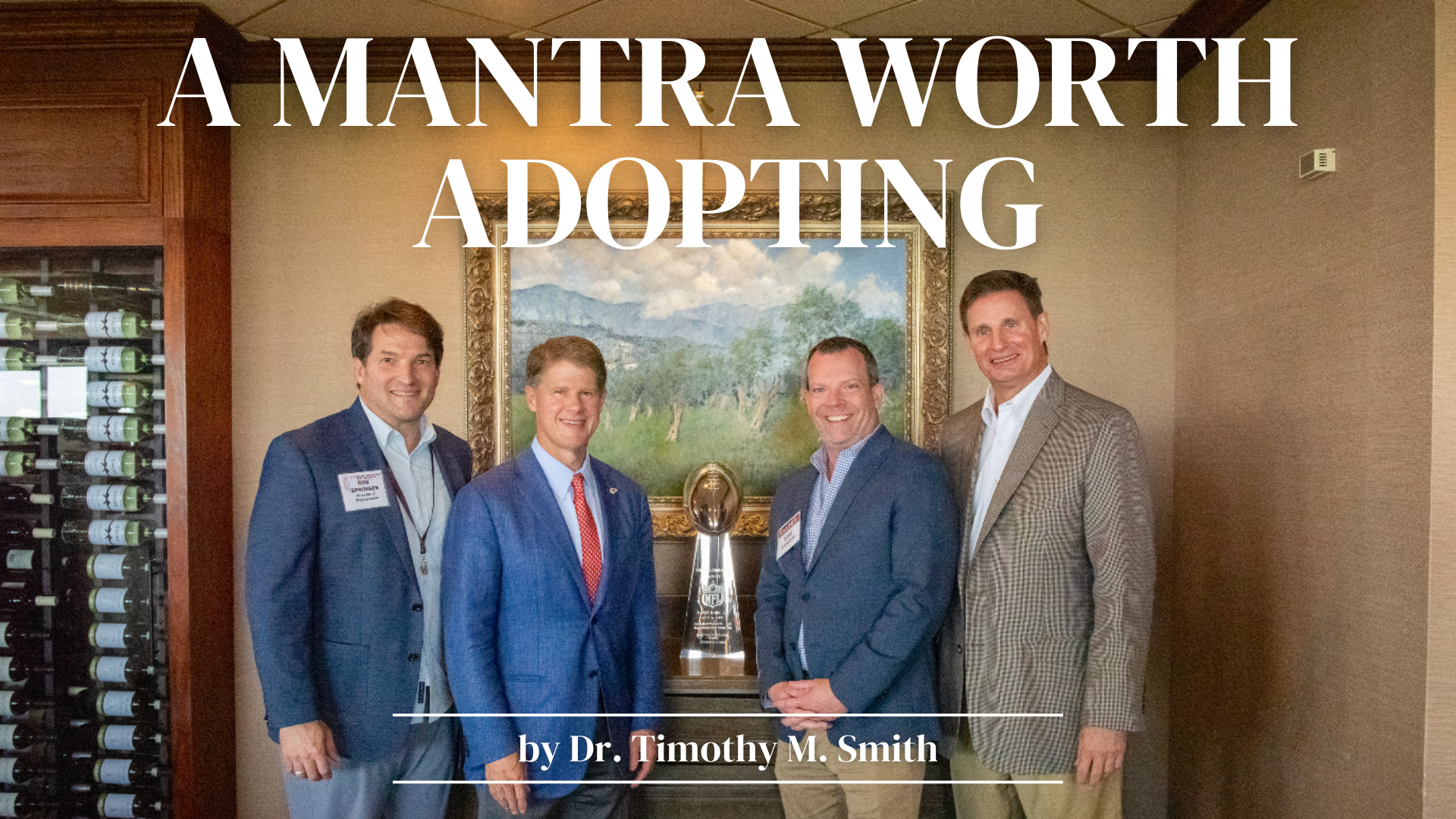 A Mantra Worth Adopting by Dr. Timothy M. Smith
Faith, Family, and Football–In That Order!

In what amounted to a re-start of a long standing strategy of the Men of Saint Michael, 125 of the group’s members and their guests gathered at the Park City Club for an inspiring conversation with Clark Hunt, Chairman of the Hunt Sports Group and CEO of FC Dallas and the Kansas City Chiefs, with Sunwest Communications owner and CEO Crayton Webb, facilitating. Mr. Hunt began his presentation with this powerful central theme, "My Christian faith is the most important thing to me. In terms of priorities, it is faith, family, and football—in that order." 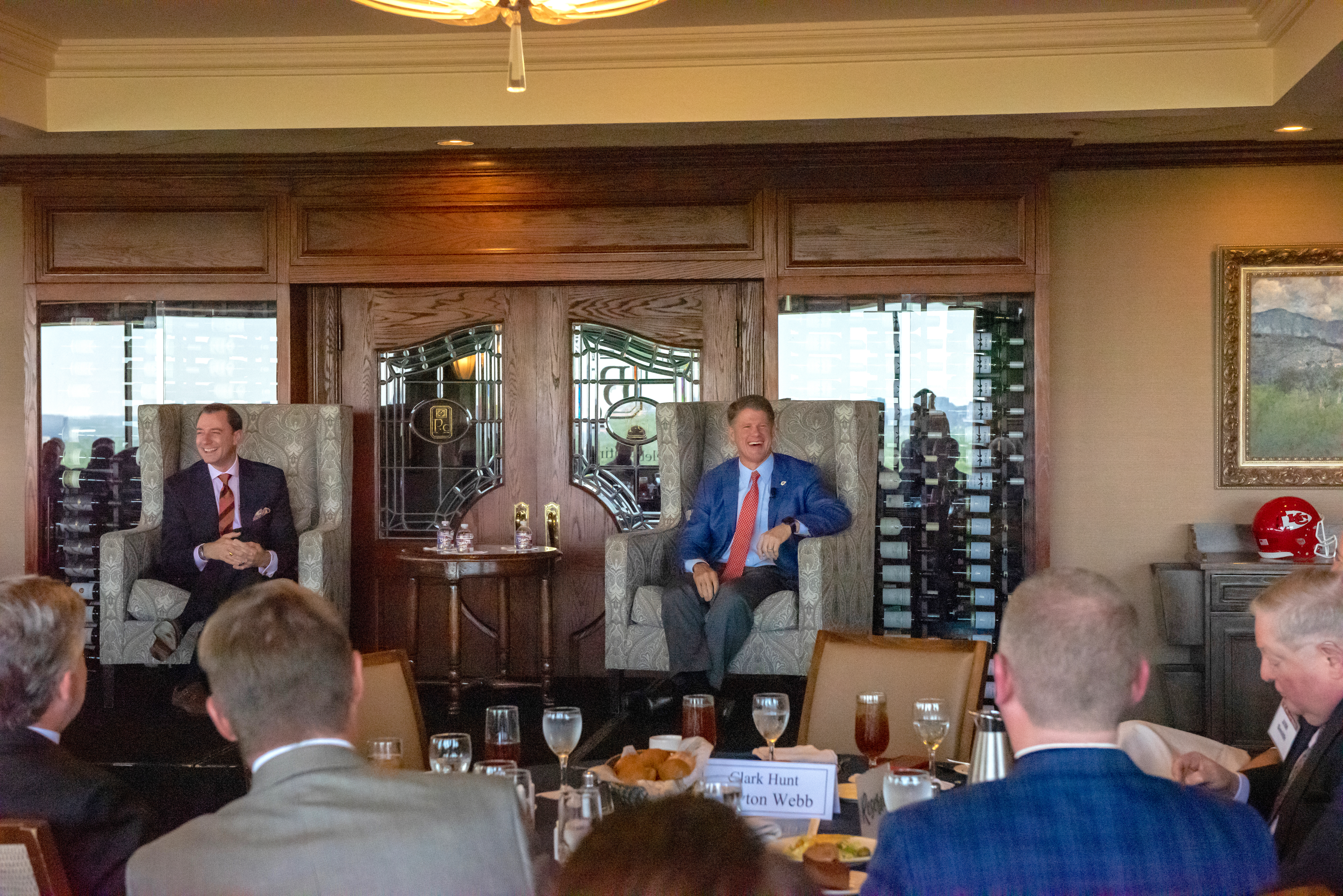 It is rare for an individual or family to have such a profound impact over the dreams of children, the aspirations of men and women, and such a positive influence on an entire Midwestern metropolitan area like Kansas City. It is even more rare when an individual and family realizes the opportunity, blessing, and perhaps obligation that has been bestowed upon them, and they choose to leverage that platform by leading through faith. The Kansas City Chiefs organization is well known for its Christian culture. For example, Mr. Hunt gave glory to God after winning the AFC championship game, and when presented the Lamar Hunt Trophy he said “I want to thank the Lord for blessing us with this opportunity. The glory belongs to Him.” During an interview after the Chiefs' Super Bowl win, Hunt said, “At the end of the day, when the confetti’s falling, I just hope it’s Jesus that gets the glory.” To back up his words, Mr. Hunt made sure that there is a chapel service at Arrowhead Stadium where fans can worship before the game. The values of the Christian faith and the encouragement to develop one’s faith is woven throughout the organization. The Christian faith is a part of everything the Chiefs organization does. That started with Lamar Hunt, Clark’s father, and those values have been preserved by his son Clark and the rest of the Hunt family. Offensive Lineman, Stefen Wisniewski states, “There’s definitely a lot of Christians in the organization, and when it starts at the top, that’s pretty powerful…”

In addition to speaking about the role of faith in his life, family and work, Clark regaled the men with stories of football including growing up in a professional football owner’s family, the founding of the American Football League, starting the Dallas Texans which became the Kansas City Chiefs, the naming of the Super Bowl by his mother and the drafting of star quarterback Patrick Mahomes. He also spoke about the future of soccer, predicting it may become the number one sport in America in the next few decades. Finally, he shared a story of friendly competition with his brother, Dan, President of FC Dallas, to bring World Cup Soccer to their respective cities, Kansas City's Arrowhead Stadium and Dallas' AT&T Stadium. Neither lost, as both cities were named as sites for the World Cup in 2026. 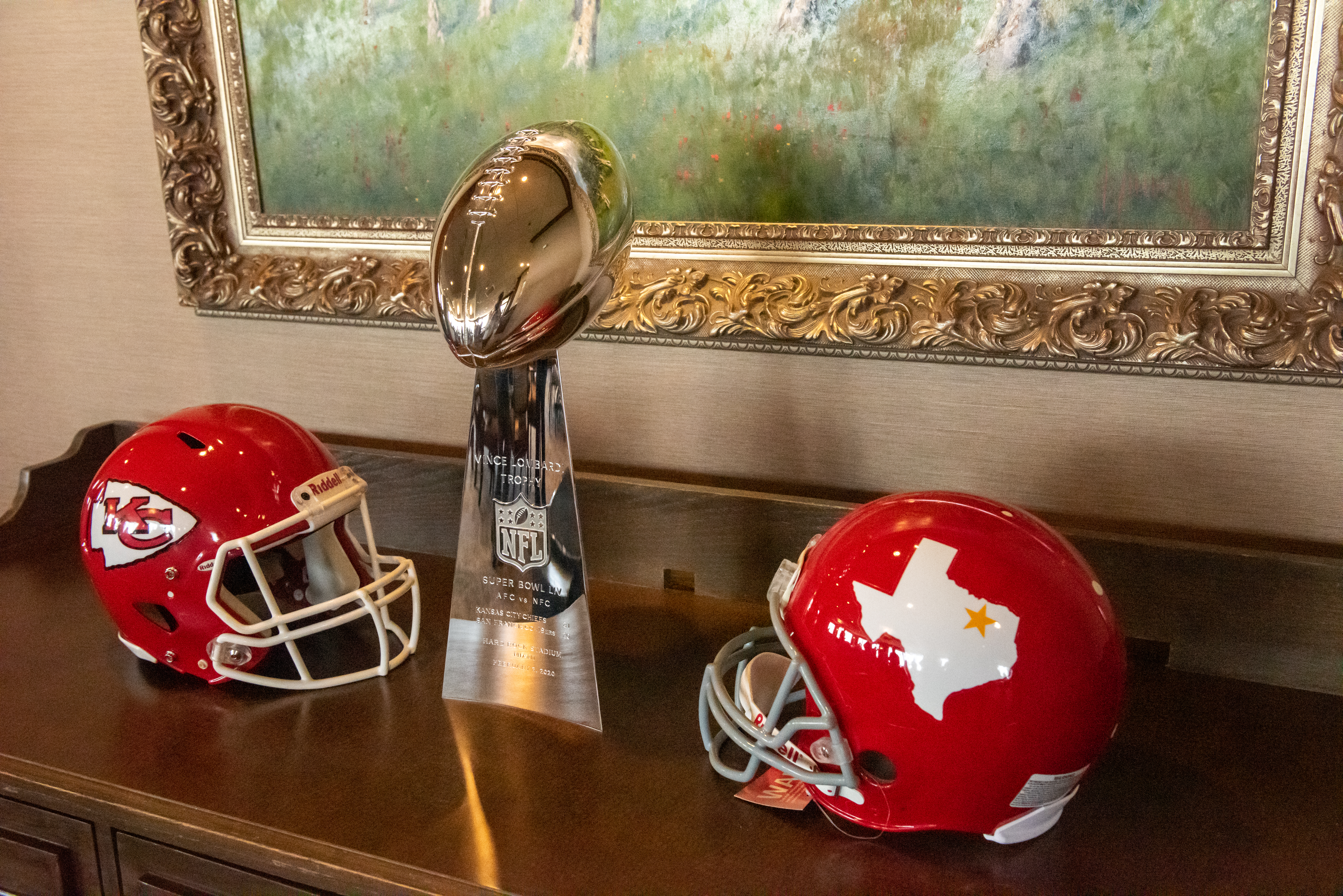 The reinstitution of a large event men’s gathering over a meal started when Bob Penn and Jack Rubarth met with Brian Mackin and Tim Smith, Director of Formation, to share the story of the MOSM’s well attended speaker led breakfasts at different venues for many years, with as many as 200 men attending. Bob Penn writes, “The goal has always been to provide spiritual food and insight as well as to create a sense of fellowship and mutual support.” After hearing the history, the MOSM formed a large event team and were fortunate to be able to schedule a date that fit with Clark Hunt’s schedule for the first in what they hope will be a long series of inspiring outreach events. May’s luncheon was meant to be an introduction to Saint Michael and to invite other men for the MOSM’s next book study, “Why Men Hate Going to Church.” The MOSM meet on Wednesdays at 7 a.m. in Room 103 which includes vibrant discussion, delicious breakfast tacos and steaming hot coffee. Other book studies this past year have included, “The Jesus I Never Knew” by Philip Yancy and “Humility” by Andrew Murray.

The Men of Saint Michael group is currently led by Eric Gilmour, who along with Brian Mackin based their meetings on those of Richard E. Simmons III, founding director of The Center for Executive Leadership, a faith-based ministry in Birmingham, Alabama. The goal of the model is to provide coaching for businessmen and professionals. Today, the Men of Saint Michael seek to create an environment where men can form lasting relationships and be challenged and encouraged in their life and faith. Their recently formed core values include: Safe Community, Authentic Relationships, Growing Faith, Christian Service and Complete Confidentiality. 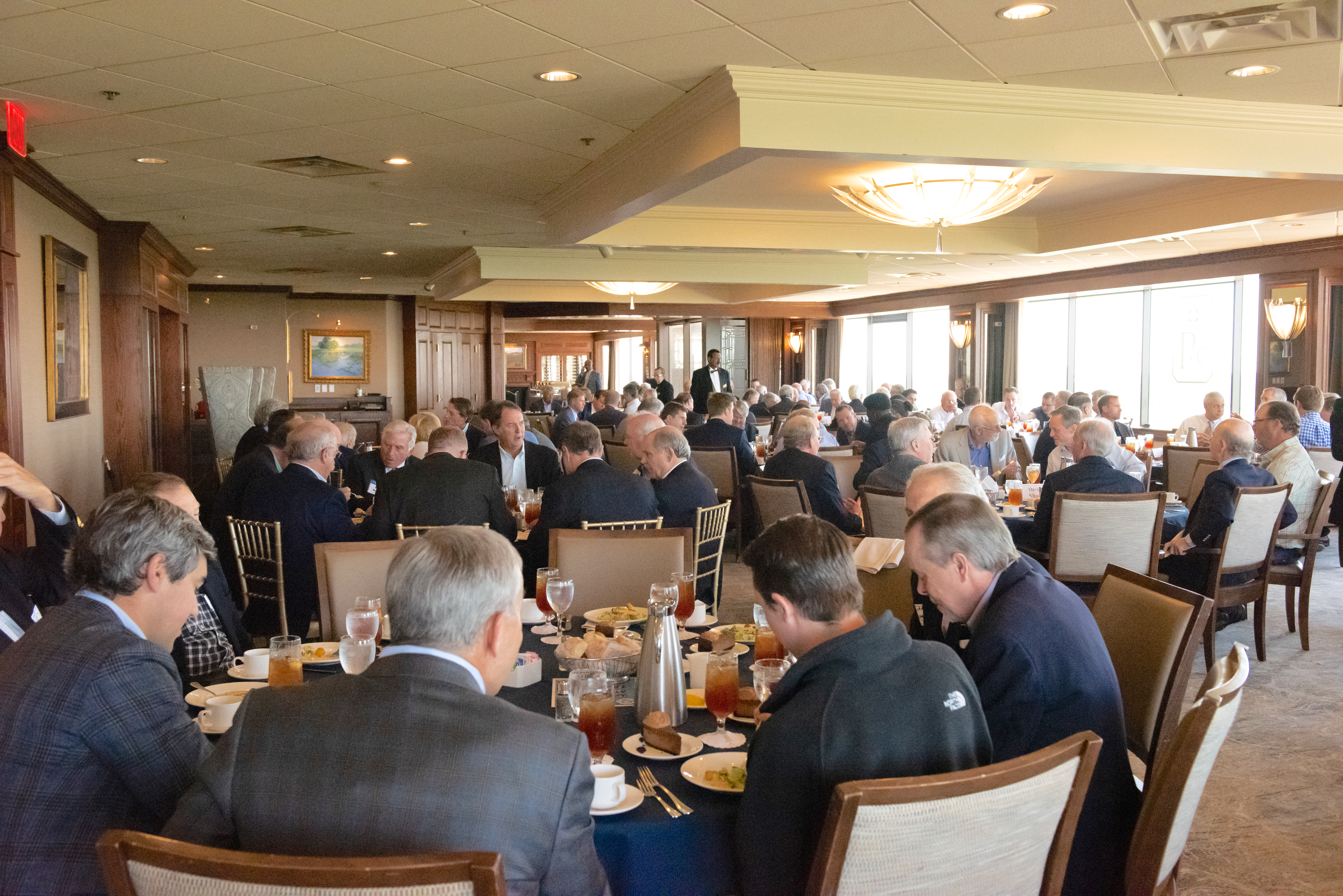 The lunch and discussion with Clark Hunt, was well received by members of Saint Michael and their guests. Member John Ellerman stated, “Clark Hunt provided insights on balancing the demands of faith, family, and vocation and how men should properly prioritize them in our dayto-day lives.” One guest said, “It’s great to come to a church event and not be preached at.” Another stated, “Please invite me to the next event."

After the success of their first large event luncheon, the MOSM have committed to quarterly breakfast gatherings. These events are meant to be an outreach to men who might not otherwise initially accept an invitation to worship. Thus, the hope is that the breakfasts might be an onboarding event into the life of the Men of Saint Michael. The next event is scheduled for Wednesday, September 7. The speaker will be retiring Big 12 Conference Commissioner Bob Bowlsby and again moderated by Crayton Webb of Sunwest Communications.

On September 14, the Men of Saint Michael will begin their next book study, “Resilient: Restoring Your Weary Soul in These Turbulent Times” by New York Times Bestselling author John Eldredge. In Resilient, Eldredge provides skills and tools to strengthen your heart and soul and reveals a path toward genuine recovery and resilience provided by Jesus himself. If interested, please join us or contact Eric Gilmour at [email protected].

**This article was written by Dr. Timothy M. Smith and was featured in the 2022 Fall Archangel.