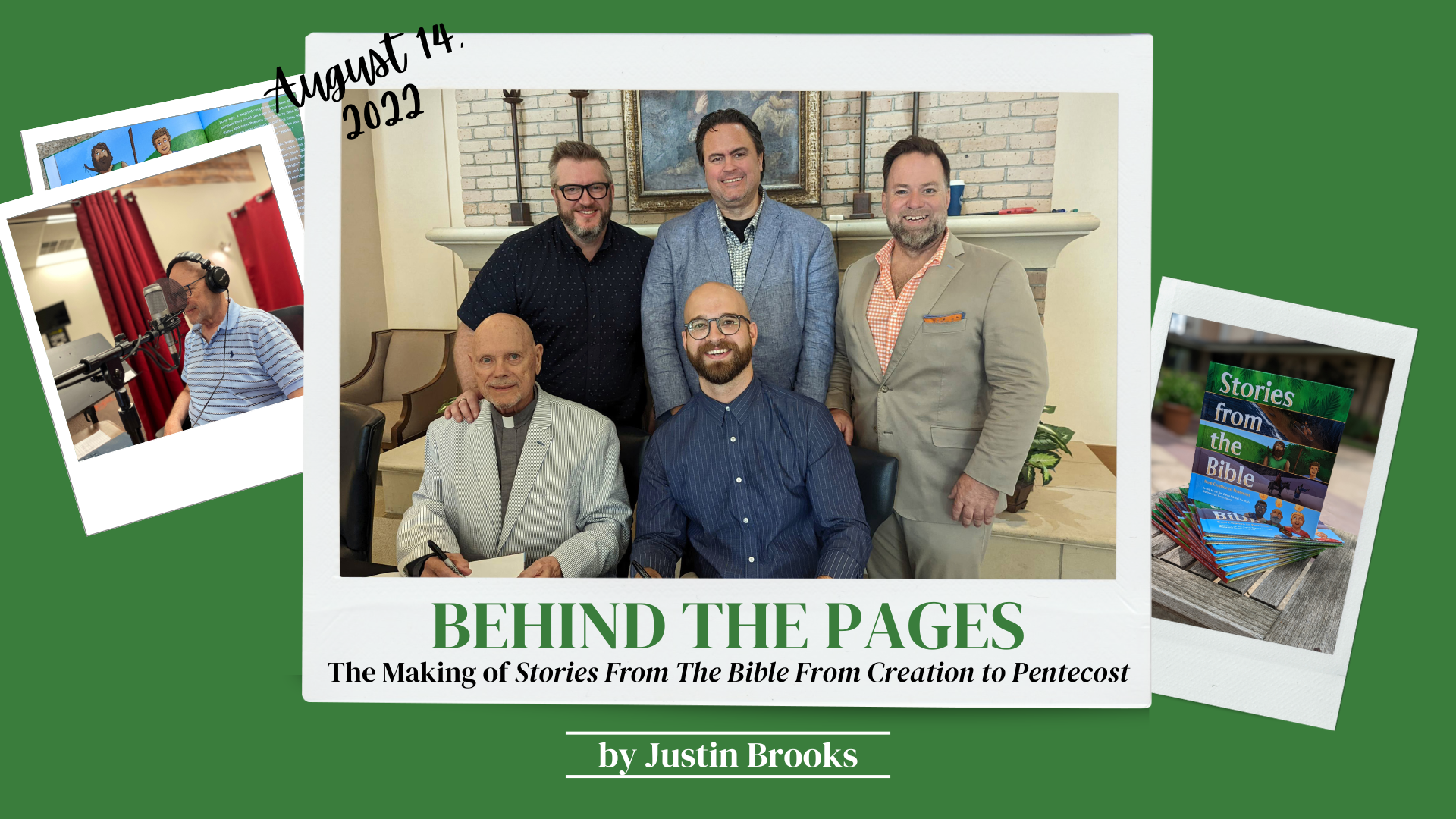 Behind The Pages: The Making of Stories From The Bible From Creation to Pentecost
by Justin Brooks

I’ll never forget the day I attended the Joy Service for the first time and heard the mellifluous sound of a Pittsburg accent carrying the following words to my uninitiated ears:

“Boys and girls, if the idea of the Trinity seems confusing to you, don’t worry ‘bout it. It’s a mystery.” 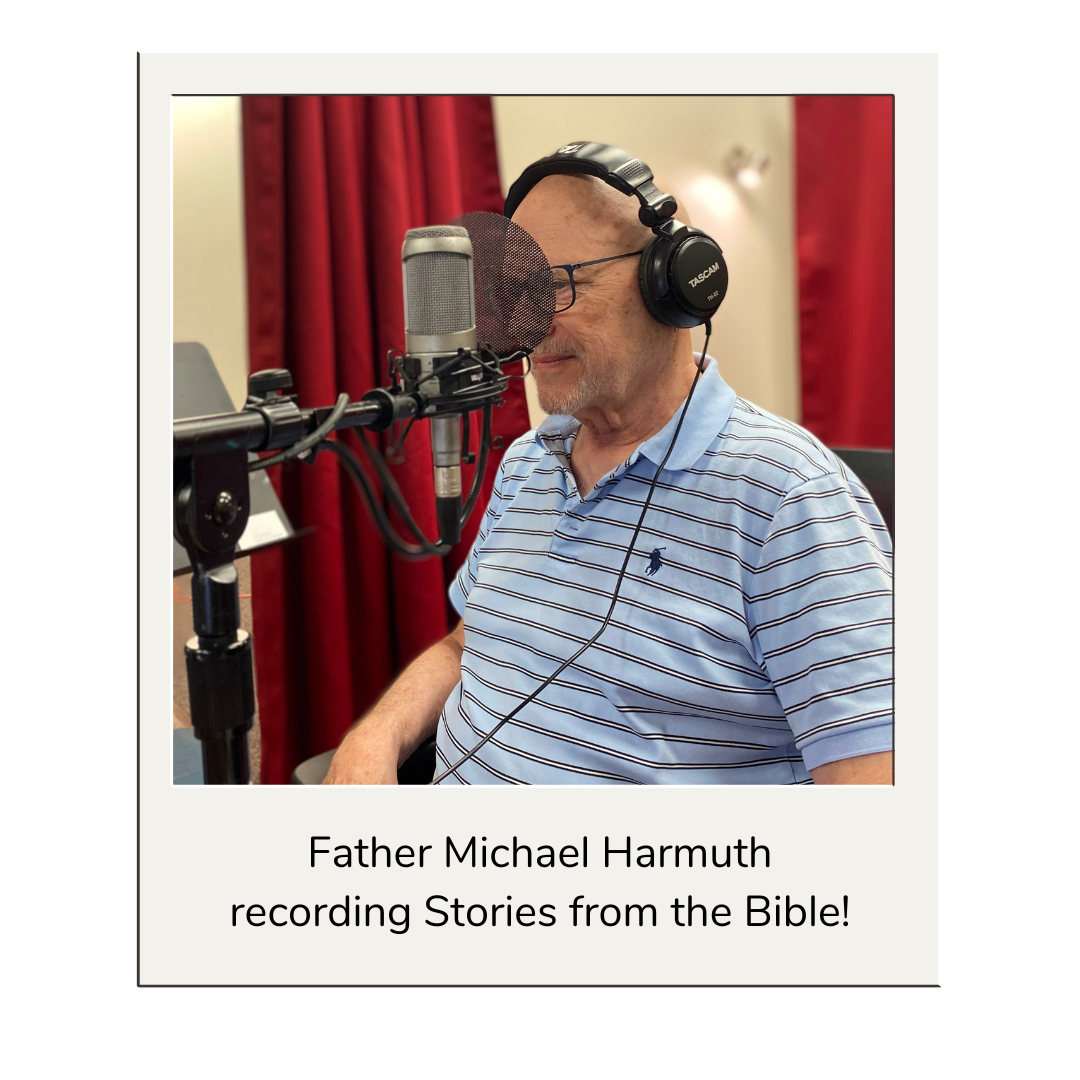 I could hardly believe the simplicity in which this complex idea was presented to the eager young listeners. The orator of this statement, I would come to find out, was none other than the Rev. Canon Michael Harmuth. It would become apparent through working with him over the next five years that I was witnessing only a minuscule portion of his abilities as a communicator to children. A priest for 58 years, having served 23 of those years at Saint Michael and All Angels, Father Michael has used his unique gift of storytelling to share the gospel with generations of young children and families.

As part of the team of musicians leading our children in song at the Joy Service, I’ve had the weekly privilege of a “front row seat” to Father Michael’s family-oriented sermons. On any given Sunday, Bible stories seemingly leap from the page, inducing a sense of wonder as he explains them in an understandable and simple way. For example, when telling the story of Creation, he asked the boys and girls to take a deep breath to demonstrate that the same life-giving Spirit God blew into Adam and Eve is also in them. At a family Ash Wednesday service, he reassured the children that the ashes they were about to receive would not be hot, so there was no reason to be afraid. These are simple but comforting things and give children the respect that they deserve. It became increasingly clear that the way Father Michael tells these stories should be recorded in a more permanent way for families to enjoy outside of the church walls. As news came that Father Harmuth would soon be retiring, it became imperative that we do this, as it would be a significant and meaningful way to honor his ministry with us. 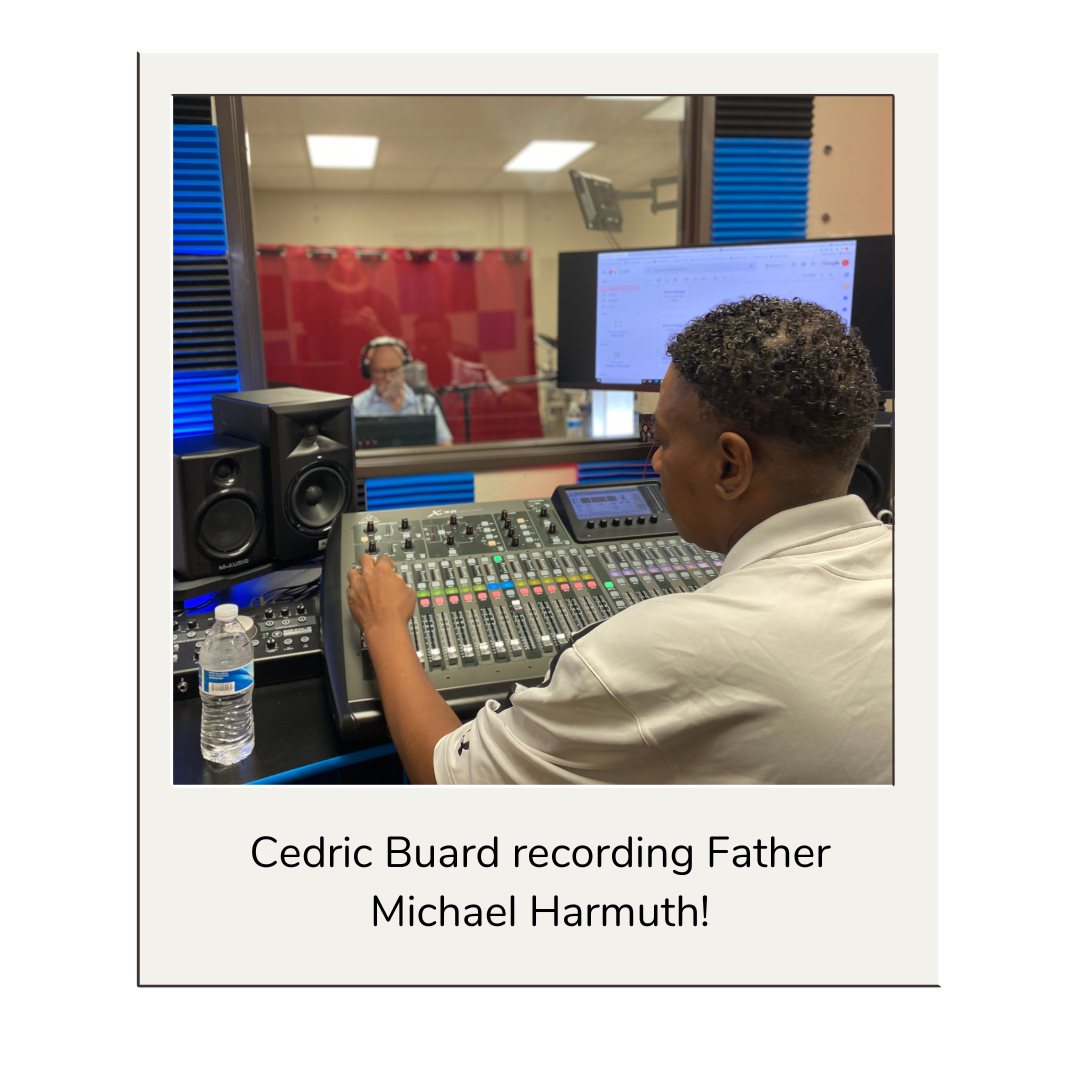 In January of 2021, I approached Father Michael and asked if he had ever considered collecting his stories in a children’s book. He said, “Sounds fun! I’ve never written a children’s book before; how do you suppose we go about something like that?” I replied, “I have no idea, but we’ll figure it out together.” That same spirit carried us into assembling a team of gifted, like-minded people who wanted to help bring this vision to life. For many of us, it was our first time to work on a book project, especially a children’s book. When proposing the idea to our “Dream Team”, the common refrain was, “I’ve never done anything like this before, but why not? Let’s do it!” It became evident that the Holy Spirit was at work, and soon our team began to form. Father Michael as author and narrator, me as producer, editor, and manager, Steve Haal as co-editor and manager, Travis Harvey as our illustrator, Kassie Taylor as proofreader/editor, Cedric Buard as our audiobook engineer and mixer, and Lane Harder as composer for the audiobook music. I’d also like to acknowledge Adam Jones, published author and former SMAA staff member who was immensely helpful in pointing us in the right direction on how one goes about the publishing process. 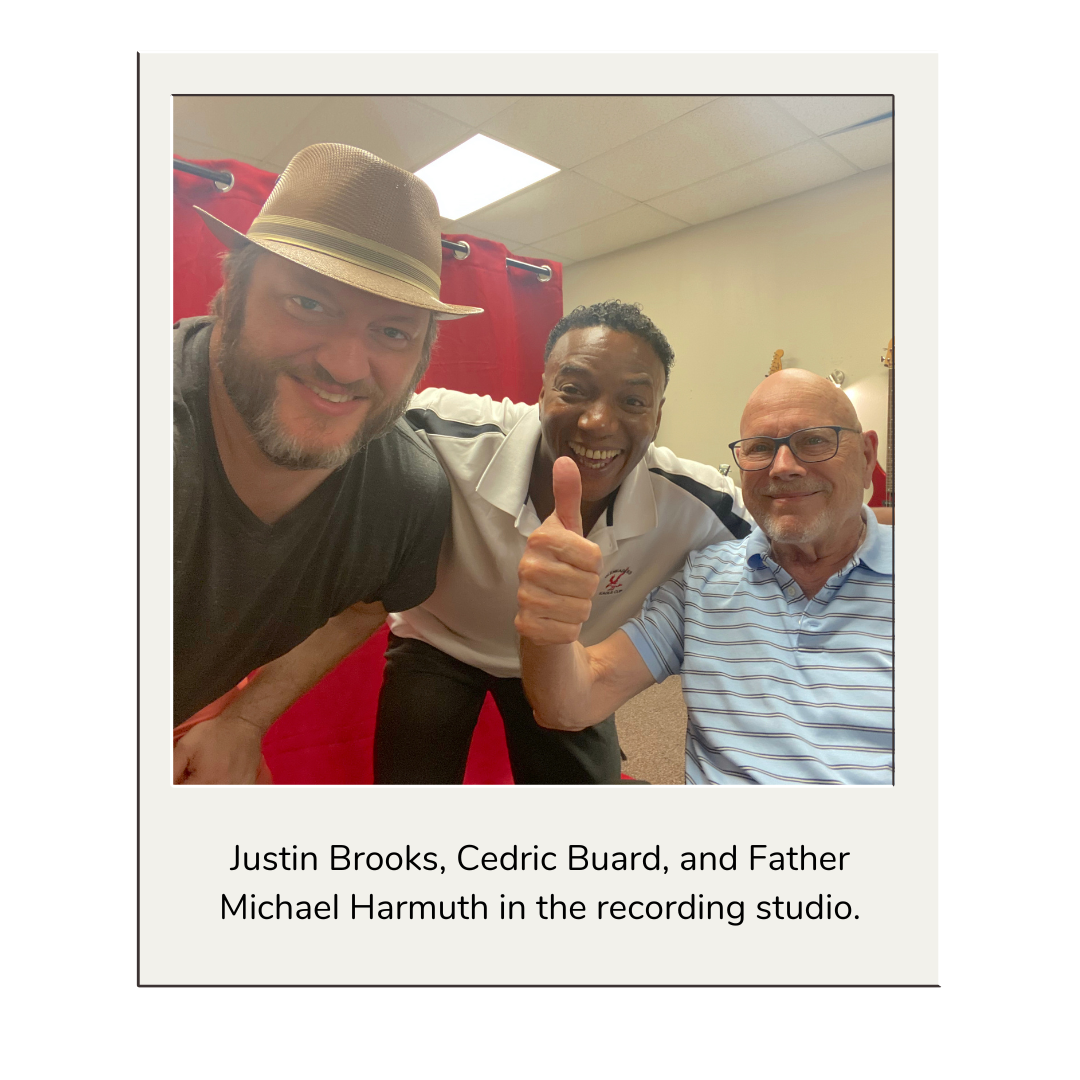 As we prayerfully considered the vision of the book, we knew we wanted families to experience these stories with one another. It should be a big, beautifully illustrated book to allow the kids to envision these stories and to add an element of visual excitement. The final piece of the puzzle would be to record an audiobook to capture Father Michael’s particular way of speaking as he brought these stories to life. The book would be simply and aptly titled, Stories From the Bible: From Creation to Pentecost.

I’ve heard authors say that when one decides to write a book, it becomes all-consuming. You’ll edit, then edit more, and just when you think you’re done, you’ll edit it even more. This proved true for us as well. Proofing, redesigning, editing, and illustrating seemingly became our breakfast, lunch, and dinner from May 2021 until August of 2022. However, after a year and a half of diligent work, the day finally came when we had the finished product in hand. 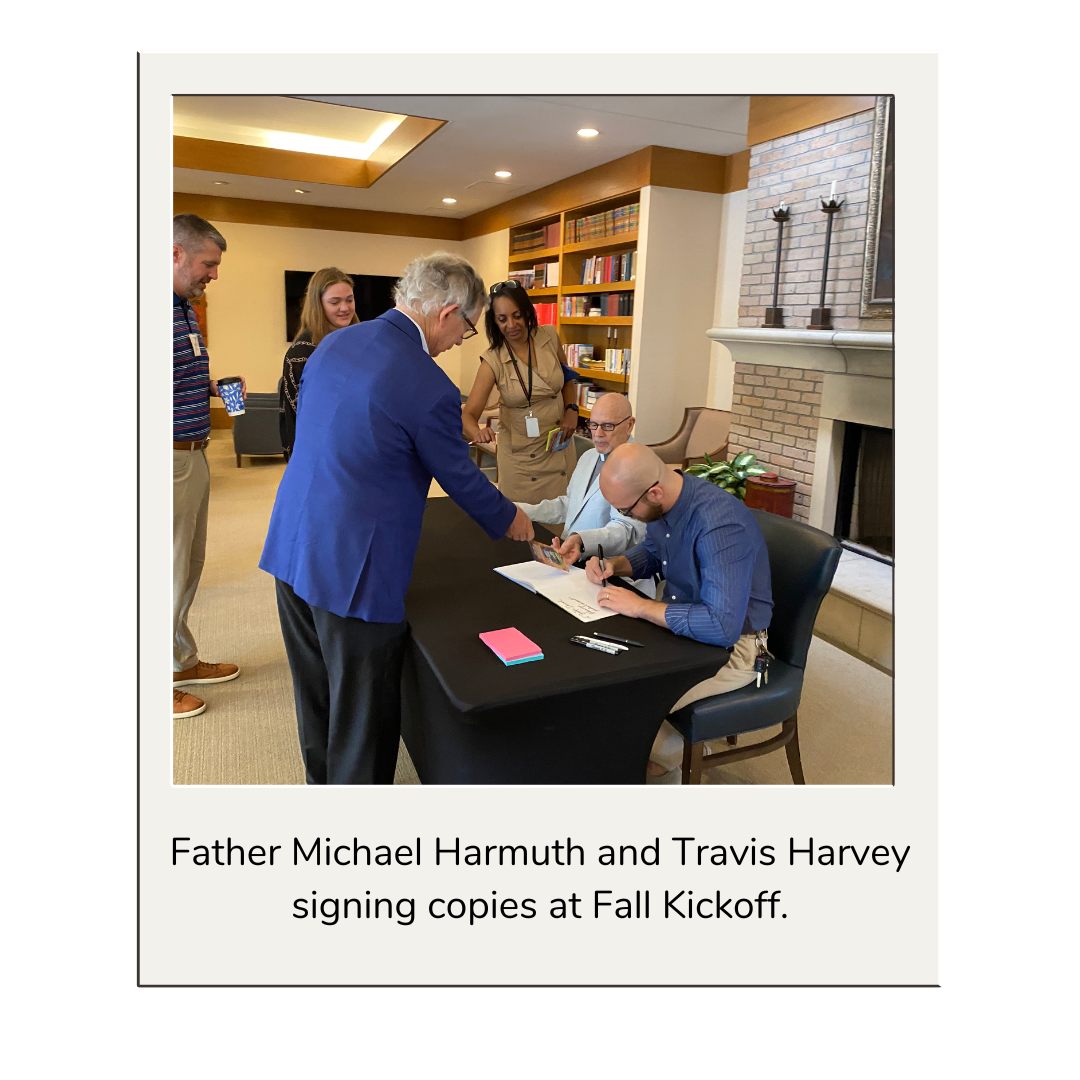 On August 14, 2022, Stories From The Bible was released with a book signing by Father Michael and illustrator, Travis Harvey. Father Michael said of the day,

“This has been a wonderful experience and it’s amazing to see the response. There were people here from ESD who were little kids when I was chaplain there. They’ve grown up and are now adults, but they tell me it reminds them of those days when we were all together in chapel. I love telling these biblical stories to children. I tried to do it in their words and understanding. Working with Justin Brooks, Steve Haal, and Travis Harvey has been a joy in producing this book. It was incredibly heart-warming to see how much the book meant to so many.”

Several parishioners have reported how they not only love to read it to their kids and grandkids, but that the stories come alive for them as well. 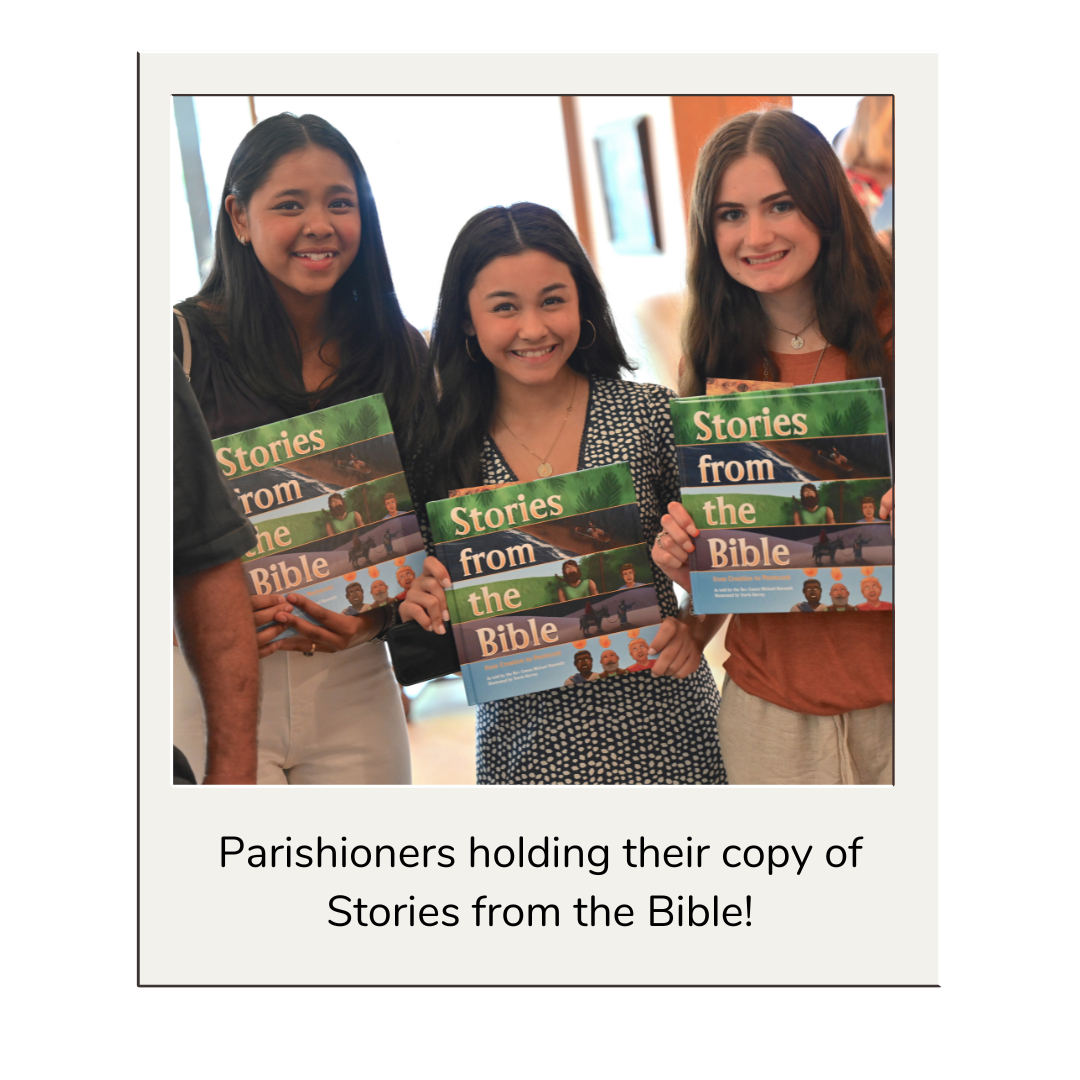 One of the largest, most difficult, and most important tasks of this project were the illustrations. Travis Harvey took this on and produced truly stunning results. When he showed us the initial sketches for the first time, our jaws just hit the floor. We knew he would do a great job, but we had no idea of the true beauty he would bring to these stories. One of our team’s favorite images in the entire book was the illustration of the “Little Girl”. It depicts a vast, desolate room, with the girl lying alone in her bed. A lone beam of sunshine illuminates her bed through the window. It conveys her desperate situation and the loneliness she must have felt. Yet, the light represents that there is hope. Father Michael said of the image, “That one image tells the story.” Co-editor and project manager, Steve Haal, agreed. Recalling the first time he saw the illustration, he remembers, “When we were going through the illustrations and I saw that, I said ‘This is the one page that doesn’t get changed.’”

“It was fun, but also challenging. These stories are not small. All twelve stories are big, not only within context of scripture, but also as individual stories. There's a lot to represent in only a few images per story, so we had to find out how to represent a complicated idea in one image. I think that was the biggest challenge.”

When asked if the rumor was true that he inserted an illustrated version of himself into a few of the scenes, he laughed and said, 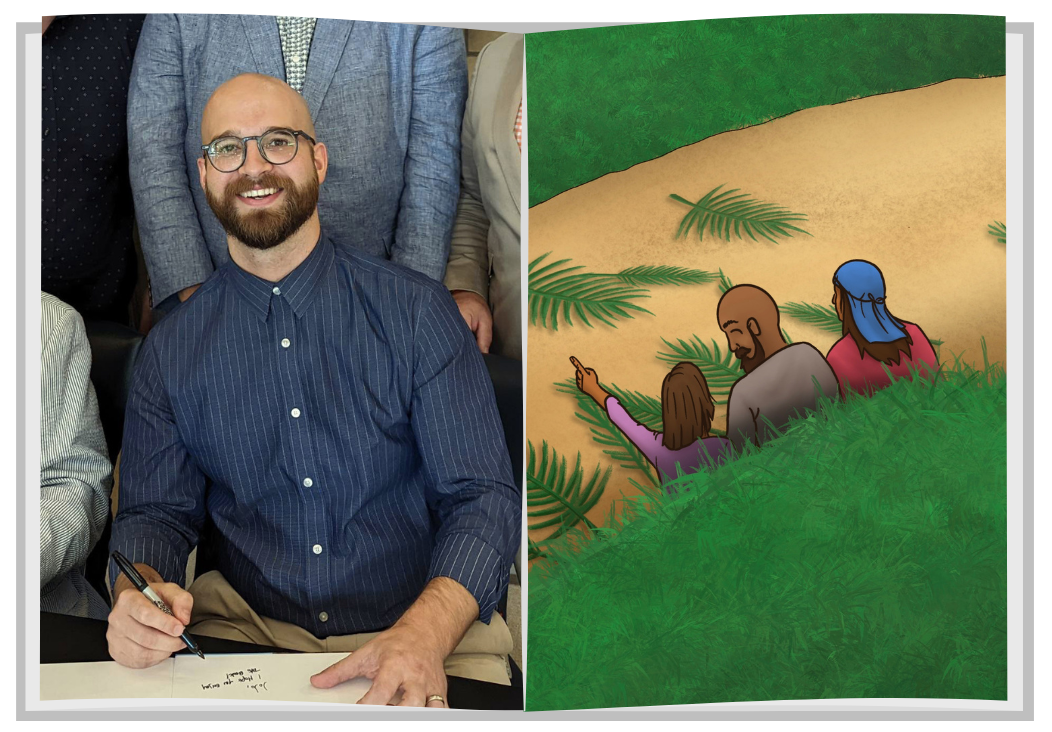 (Join us in a game of "Where’s Travis" and let us know if you find him!) In "The Birth of Jesus" and "Jesus and a Donkey", Father Michael talks about the importance of donkeys. Donkeys are humble animals and are mostly used to assist in hard work. They are not particularly majestic, but this animal was chosen by God to carry the mother of Jesus to Bethlehem, and Jesus, the King of Kings, into Jerusalem on Palm Sunday. If there was a main theme to this book, it would be that sometimes you may not feel important or worthy, but God knows your worth, and has a wonderful plan for your life. 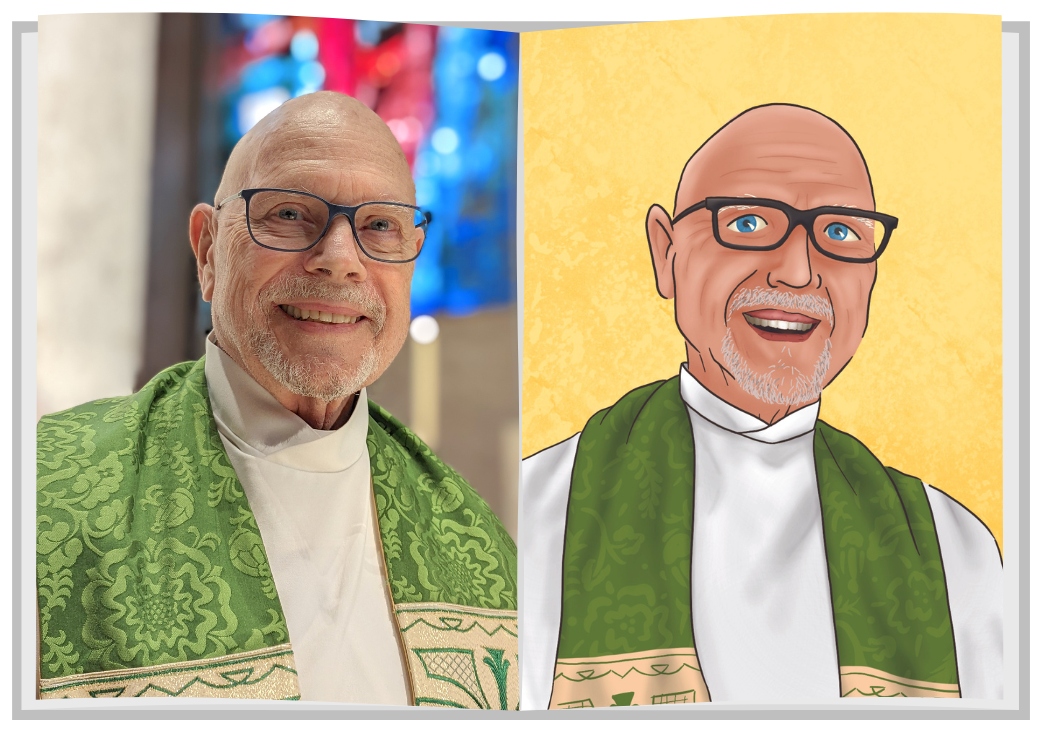 In the words of Father Michael and the way he ends every story in the book: Amen. May God bless you.

Copies of Stories from the Bible are available for purchase in the Saint Michael Book Shop.

**This article was written by Justin Brooks and was featured in the 2022 Winter Archangel. 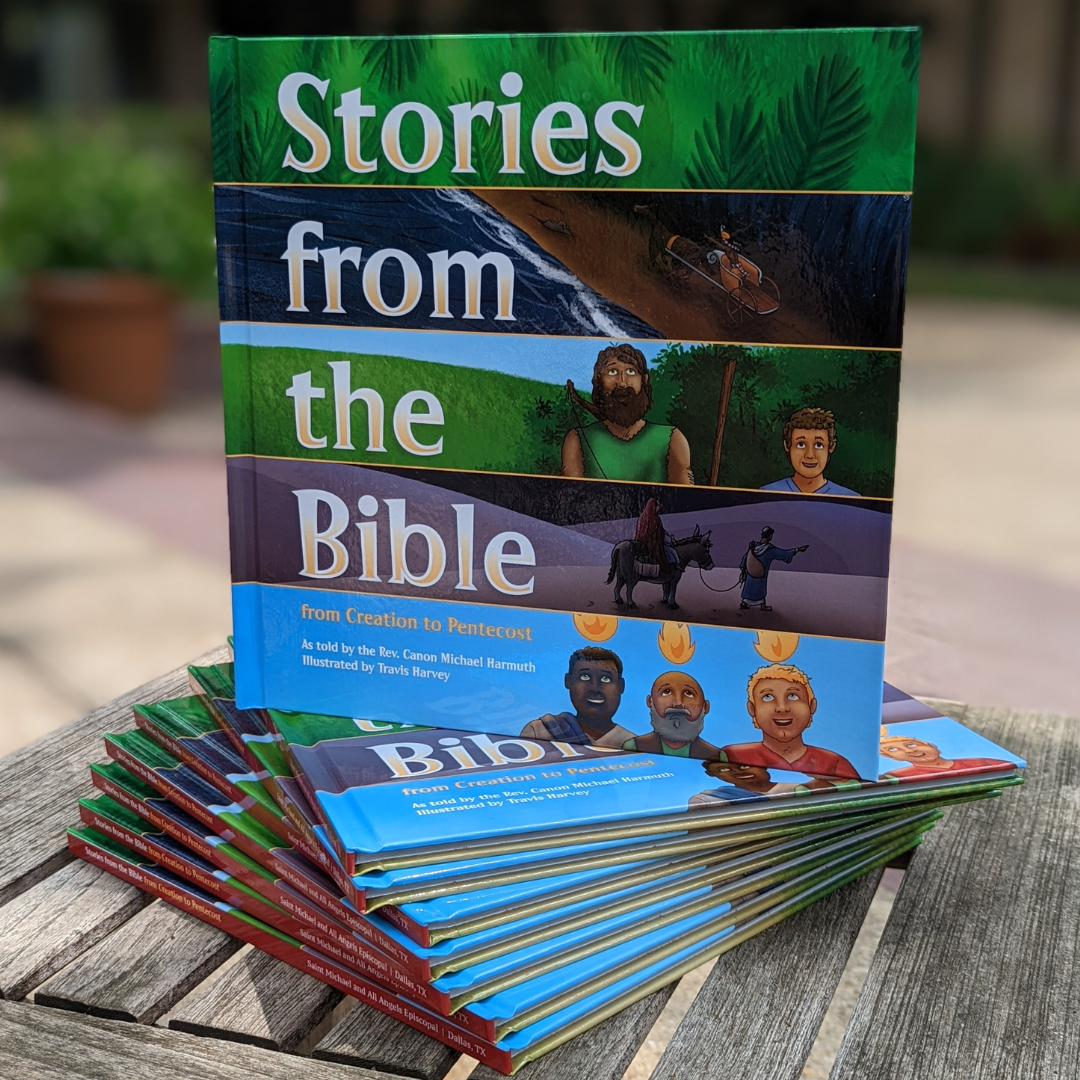