Media: Archbishop of Canterbury and Presiding Bishop Join to Speak in Dallas Sept 20 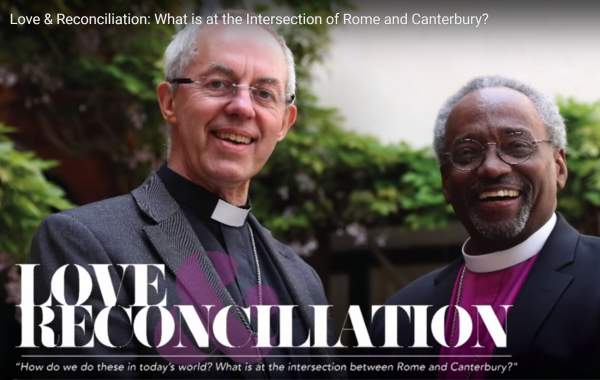 Please direct all inquiries to: Steven Haal, Director of Communications

“LOVE AND RECONCILIATION:
How do we do these in today’s world?”
A discussion panel featuring both The Most Revd. and Rt. Hon. Justin Welby, Archbishop of Canterbury and The Most Rev. Michael B. Curry, Presiding Bishop of the Episcopal Church

Sponsored by
The American Friends of the Anglican Centre in Rome
www.americanfriendsacr.org

DALLAS, TX The Rev. Dr. Christopher D. Girata, Rector of Saint Michael and All Angels Episcopal, will moderate a discussion centering on love and reconciliation. These two topics play a primary role in the platform and priorities of both the Archbishop and Presiding Bishop. The talk will touch upon the evidence of global need, the responsibility we, as Christians, each share in the way of Jesus, and what intentional actions of love and reconciliation might look like in today’s world.

This is a historic moment as it will be the first time these two leaders have met with one another on American soil since they have both been in office.

This special panel discussion event will also be streamed live online via Livestream and our Facebook page, and available afterwards on demand:

Before he began training for ministry in 1989, Archbishop Justin worked in the oil industry for 11 years – five in Paris and six in London.

Archbishop Justin has three main priorities for his ministry – Evangelism and Witness; Prayer and the Renewal of Religious life; and Reconciliation. He is a member of the Parliamentary Commission on Banking Standards and a High-Level Advisory Board on Mediation for the United Nations. He is the author of Reimagining Britain and Dethroning Mammon, both published by Bloomsbury.

He attended public schools in Buffalo, NY, and, even at a young age, he learned about social activism through his father’s leadership and his own dedication to righting a broken world.

Presiding Bishop Curry was graduated with high honors from Hobart College in Geneva, NY, in 1975. He received a Master of Divinity degree in 1978 from Yale University Divinity School in New Haven, CT. He has furthered his education with continued study at The College of Preachers, Princeton Theological Seminary, Wake Forest University, the Ecumenical Institute at St. Mary’s Seminary, and the Institute of Christian Jewish Studies. He has received honorary degrees from Episcopal Divinity School; Sewanee: The University of the South; Virginia Theological Seminary; and Yale.

About The American Friends of the Anglican Centre in Rome
The Friends of the Anglican Centre in Rome are men and women, priests and lay people, the newly curious as well as committed ecumenists, young, old and everything in between. We hold a diversity of views on social, political, and theological positions, and have many different ways of trying to understand unity between the Anglican Communion and the Roman Catholic Church. Most of all, each and every one of us is committed to a dialogue between our churches that is never dull, that is alternatively frustrating and rewarding, and that’s always worth the effort.

About The Rev. Dr. Christopher D. Girata
The Rev. Dr. Chris Girata was called to be the eighth Rector of Saint Michael and All Angels in June, 2016 and started his ministry at Saint Michael on August 15, 2016. Previously, Chris served as Rector of Calvary Episcopal Church in downtown Memphis, Tennessee, a position he had held since 2012. Prior to becoming rector at Calvary, he was Associate Rector at St. Luke’s in Birmingham from 2008 – 2012, and as a seminarian served at The National Cathedral in Washington, D.C., and at St. John’s in Chevy Chase, MD. He is recognized as a leader in the Episcopal Church, presenting regularly at church-wide conferences, seminars and retreats, and the Consortium for Endowed Episcopal Parishes. Chris is a native of Florida, a classically trained musician, and an amateur cook. He and his wife, Nicole, have three children.


Join Chris for an exciting study of Daniel and Revelation, the two most significant apocalyptic books of the Bible. We will consider how these books have been understood (and misunderstood!) throughout Jewish and Christian history, and how they can guide us in our own discipleship today. Visit the link above to watch live or recorded video.

Children raised in the same home with the same parents can have very different personalities.  This is because, regardless of environment, we are each born with a disposition toward our personalities.  And parents have their own personalities that impact how they parent. Enneagram & Parenting looks at each of nine numbers and their tendencies and priorities that show up in parenting.  It also helps parents understand how their number may have compatibility or conflict with children who are different numbers.  The goal of the class is for us to understand ourselves and become better parents to our children regardless of their number. Completion of The Enneagram Journey class is required in order to participate in any Enneagram Intensive offering.​ For questions and registration, please contact Mary Lessmann at [email protected].​

Join us this Lent as, over the course of six Thursdays, we dive deeply into music that is thematically linked to Lent and Holy Week. We will examine masterworks of Western sacred music including the Allegri "Miserere," J.S. Bach's "St. John Passion," Thomas Tallis's "Lamentations of Jeremiah," and more. This class assumes some knowledge of basic music terminology, but does not require an advanced musical background. For more information and for the Zoom access code, reach out to Meg Harper at [email protected].