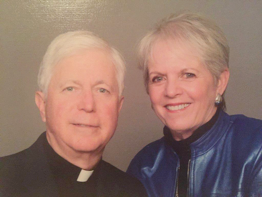 I am so pleased to announce that the Rev. Robert A. Scott has been called to be our next Associate for Worship and Liturgy. A former member of Saint Michael and All Angels, Bob returns to us after nearly 15 years in Oklahoma where he was a lay leader and then ordained a priest at St. John’s Episcopal Church in Tulsa.

Bob’s extensive professional career has primarily focused on running operations and finance for large companies around the country. His expertise in management, logistics, and training will be a great gift as he assumes responsibility for the complex worship life of our parish.

As a second-career priest, Bob’s primary church leadership experience has been as a lay person, but that experience has been immense. Bob has been a Warden at three different Episcopal churches, a parish Treasurer twice, and a Master of Ceremonies (just to name a few) — and all three of those roles at Saint Michael! His love of liturgy as a lay person has rooted his priesthood in humility, and he brings a servant’s heart to his work.

Bob will be joining us in August, so stay tuned for opportunities to welcome him and his wife, Jann, back to our community. Until then, I have included a biography below so you can get to know him better. Please keep Bob and Jann in your prayers as they transition back to Dallas.

Most recently, Bob served as Executive Director of OSU-University Multispectral Laboratories (UML), a wholly owned subsidiary of Oklahoma State University, with offices in Tulsa, OK and Ponca City, OK, a position he held since 2013. He was responsible for the reorganization of the Company and oversaw all operations. Prior to joining OSU, Bob served as Chief Operating Officer of Knightsbridge Resources, and oversaw the relocation of the multinational company’s operations from London, England to Tulsa, OK in 2005.

For over 15 years in the banking sector, Bob held positions as CEO, President, COO and CFO for several Savings Banks. He was responsible for building an organization from 6 employees to 150 employees in a four-month period to manage a $2.5 billion “bad bank” portfolio in Dallas, TX. At another Texas Savings Bank, Mr. Scott was responsible for the reorganization and management of an underperforming $1.8 billion Covered Asset Division. Related to the institutional portfolio management sector, he held positions with the Federal Home Loan Bank, Stephens, Inc. and Shearson American Express in Little Rock, AR.

Bob was raised in Little Rock and grew up in the Baptist Church. While in college at the University of Arkansas, Bob discovered the Episcopal Church and was drawn to its beauty and openness. Bob’s wife and partner in ministry, Jann, was raised in the Episcopal Church. First a student at SMU, Jann transferred to the University of Arkansas after she and Bob became engaged and were married the following summer.

Bob received his BA and MBA from the University of Arkansas, and Jann received her BSE in Elementary Education from UA as well. After a break from teaching to focus more time on their two daughters, Tiffani and Amanda, Jann excelled as a realtor in Dallas working primarily in the Park Cities area. Jann has been active in the Altar Guild, and also serving as a Chalice Bearer and acolyte for over 30 years. She is currently a Verger at Trinity Episcopal Church in Tulsa. She has been active in the Jr. Leagues of Little Rock, Oklahoma City, and Dallas, and as a Cursillo team member in Arkansas, Texas, and Oklahoma.


Join Chris for an exciting study of Daniel and Revelation, the two most significant apocalyptic books of the Bible. We will consider how these books have been understood (and misunderstood!) throughout Jewish and Christian history, and how they can guide us in our own discipleship today. Visit the link above to watch live or recorded video.

Children raised in the same home with the same parents can have very different personalities.  This is because, regardless of environment, we are each born with a disposition toward our personalities.  And parents have their own personalities that impact how they parent. Enneagram & Parenting looks at each of nine numbers and their tendencies and priorities that show up in parenting.  It also helps parents understand how their number may have compatibility or conflict with children who are different numbers.  The goal of the class is for us to understand ourselves and become better parents to our children regardless of their number. Completion of The Enneagram Journey class is required in order to participate in any Enneagram Intensive offering.​ For questions and registration, please contact Mary Lessmann at [email protected].​

Join us this Lent as, over the course of six Thursdays, we dive deeply into music that is thematically linked to Lent and Holy Week. We will examine masterworks of Western sacred music including the Allegri "Miserere," J.S. Bach's "St. John Passion," Thomas Tallis's "Lamentations of Jeremiah," and more. This class assumes some knowledge of basic music terminology, but does not require an advanced musical background. For more information and for the Zoom access code, reach out to Meg Harper at [email protected].