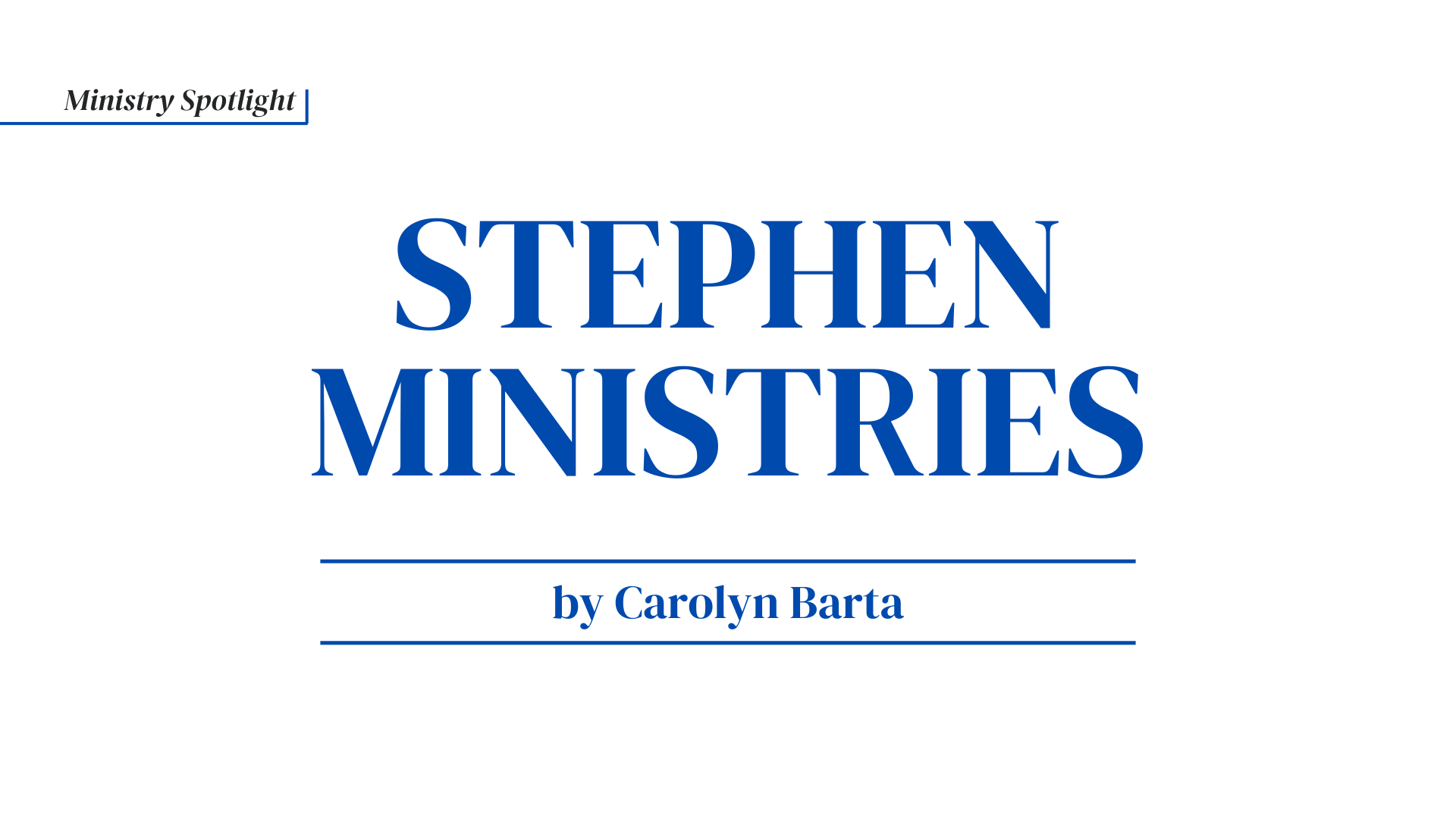 What is the Stephen Ministry? If you ask a dozen parishioners, perhaps one or two might be able to describe this important ministry at Saint Michael. That’s not good enough.


With activities back in full swing, now is a good time to broaden awareness of a ministry that in the last few years has been operating somewhat below the radar.

“I think people are unaware, they’ve forgotten about it or they just don’t understand it,” said Mary Kardell, Stephen Ministry coordinator. That’s partly due to the pandemic, but also to the confidential nature of the ministry.

The ministry has been active for almost 15 years at Saint Michael, with Stephen Ministers providing confidential, one-on-one, Christ-centered care for anyone going through a difficult time in their life. Circumstances vary and can range from the death of a loved one, a life-threatening illness, job change, demands of caregiving, dealing with an empty nest, or other issues.

“We are available, and no need is too big or too small for us to listen to,” Mary said. “Loss of life or loss of livelihood or change in marriage, these are really big things that happen to a person, and a good time to rely on a Stephen Minister.”

Stephen Ministers are not counselors. Their role is to listen, to care, and to provide support, not to give advice. The ministers go through intensive training—50 hours of initial training—to prepare for their role. They meet with their care receiver, usually once a week, for an agreed upon length of time; anywhere from one month to three years, as long as needed. They stay in touch. The two pray together. Ministers also meet together monthly and participate in continuing education throughout the year.

Stephen Ministry began at Saint Michael when then Rector Bob Dannals recruited the Rev. Patty Willett Rhyne to the clergy staff in 2008 to expand pastoral care. Patty asked Harriet Cousins to be the lay organizer. Five Saint Michaelites went to the first Stephen Ministry Leader “school.” Besides Harriet, the team consisted of Frank Guenther, Bill McGannon, Charlie Smith, and Katherine Penn. Harriet recalls that there were 15 to 20 minister trainees in the first class. Some continue to be Stephen Ministers today. Jean Coleman later became lay leader, followed by Mary Kardell.

The ministry has been successful over the years because of the dedication of lay people, the emphasis on confidentiality, continued training of new “listeners,” and clergy commitment to pastoral care. Today, the ministry is overseen by the Rev. Greg Pickens, Associate for Pastoral Care, who said, “There is a comfort that comes from two believers who gather in the name of the Lord to talk through life’s ups and downs.”

The desire to raise awareness of the ministry now stems partly from the lingering effects of the pandemic, including the limiting of church activities and social interaction for a long period, and parishioner needs that grew out of related lifestyle changes.

“Covid has greatly affected people. The isolation, loss of life and loss of the way life used to be, has produced an incredible amount of stress,” Mary Kardell said. “People think they don’t want to bother anyone. But if you’re upset about something, you should know you can talk to someone and get some support.”

Care receivers typically are referred to Stephen Ministry by Fr. Greg. Referrals also can come from other clergy, church members, or care receivers who have been helped.

The ministry is not meant to replace clergy, but to be an added resource. It recognizes that God has called all of us to minister to one another and helps everyone involved to grow in their faith. The ministers are trained to recognize when a care receiver’s needs fall outside what they are equipped to provide—at which point, they, or Fr. Greg, help connect the person with the appropriate outside resource.

Julie Smith, who trained as a Stephen Minister in 2020, and currently is in leadership training to become a training coordinator, tells how she became acquainted with the ministry.

“Twelve years ago, my husband and I lost our 30-year-old son in an accident. Our world was rocked. In the depth of our grief, someone—an angel—sent me a series of small books, Journeys Through Grief. They are four books designed to be sent from a Stephen Minister or someone you know—at different intervals during the first year of grief. They were so quiet. They were powerful.”

Then, about three years ago, Julie transitioned from her Episcopal church in McKinney to Saint Michael. Rector Painting of Saint Stephen by Carlo Crivelli as part of the Demidoff Altarpiece.

STEPHEN MINISTERS: THE "AFTER" PEOPLE

Stephen Ministers are there:

. . .after the phone call you hoped you’d never get.

. . . after the funeral, when everyone has left and the emotions you’ve held at bay come crashing in on you.

. . .after the relationship falls apart and the bottom falls out of your life.

. . .after the nursing home director shakes your hand and says, “Welcome to your new home.”

. . .after the last child honks the horn, waves, and drives away—and the house suddenly seems empty.

. . .after the gavel comes down, the handcuffs go on, and your loved one is led away.

. . .after the baby arrives, demanding more of you than you ever dreamed possible.

. . .after you find a pink slip with your final paycheck.

. . .after your family and friends have heard your story one too many times, but you still need to talk it out.

Stephen Ministers are the "After" People. They are ready to come alongside you— or your friends, neighbors, co-workers, or relatives—and provide comfort and support for as long after as needed.

Chris Girata and Vice Rector Ken Brannon were preaching about discipleship and mentioned Stephen Ministry. She visited with clergy.

“It was something I felt called to do,” she said. And this was several years after she was introduced to the ministry by the grief books. “You plant a seed and where it goes nobody knows.”

She wants people who are hurting to know that they can have a caring Christian presence to provide emotional and spiritual support. “Through Scripture we’re called to be listeners. We’re the care giver. God is the cure giver. We can give care, but God gives the cure. Hearing people talk helps them move forward or have the strength to get up in the morning,” she said.

“In a church this size, pastoral care is huge. There are many wonderful supportive pastoral care ministries. Some people might be part of more than one pastoral care group. The thing about Stephen Ministry is that it’s one-on-one and confidential.” Stephen Ministers recognize that it’s not easy to ask for help. In challenging times, people will try to tough it out on their own, wearing a smile that is holding back a flood of tears. But God does not intend for us to suffer alone. Jesus promises, “Come to me, all you who are weary and burdened, and I will give you rest” (Matthew 11:28). We can receive this promised rest when we turn to one another for comfort and help.

WHAT IS STEPHEN MINISTRY?

Stephen Ministers are lay caregivers. They have engaged in high-quality training in Christian caregiving, including topics such as listening, feelings, boundaries, and assertiveness.

Care receivers are the recipients of Stephen Ministers’ care. They are people from our church or community who are experiencing grief, loss of a job, divorce, loneliness, illness, or other life difficulties.

WHAT DO STEPHEN MINISTERS DO?

Stephen Ministers are caring Christians who listen, understand, accept, and pray for and with care receivers who are working through a difficult time in life.

WHERE DID IT ALL START?

Stephen Ministry has been around since 1975, when Kenneth Haugk, a pastor and clinical psychologist, began the ministry in order to multiply the caregiving in his congregation in St. Louis, Missouri. More than 13,000 congregations are enrolled in Stephen Ministry representing 187 Christian denominations in 50 states and 30 other countries.

WHY THE NAME STEPHEN?

The name Stephen comes from St. Stephen, who was the first layperson commissioned by the apostles to provide caring ministry to those in need (Acts 6).

**This article was written by Carolyn Barta and was featured in the 2022 Winter Archangel.