London is a wonderful city to visit any time of the year, but right before Christmas is a truly special time to be there! The ornately-decorated store fronts, glowing “angels of light” hovering over Regent Street, the smell of roasting chestnuts wafting from vendors’ carts on almost every street corner, all help create London’s Christmastime magic. This year’s group from Saint Michael and All Angels attending the Compass Rose Society’s annual meeting had the opportunity to experience London in its pre-Christmas glory … but also so much more.

This year’s Compass Rose meeting occurred the week before Thanksgiving and attendees included Chris Girata, Mary and Russ Lessmann, Christi and Warren Houser, my wife Suzanne and me. After arriving, we were free our first day together to explore London. We visited St. Paul’s Cathedral, the Borough Market, and we toured the Tower of London guided by one of the Tower’s high-ranking “Beefeater” guards. These guards actually live on the Tower premises along with their families, so imagine what incredible games of “hide and seek” their children can play! After touring of the Tower, we ended our first day with a champagne toast at the top of the Shard, one of London’s newest and tallest buildings, while watching the sun setting on the vast expanse of the city lighting up below us. The views were incredible!

The next two days were dedicated to the meeting. The Compass Rose Society is an organization created to financially support the missional work of the Archbishop of Canterbury and the Anglican Communion around the world. Members of this Society, including both churches and individuals, provide a significant percentage of the funds available for this work, coming primarily in the form of aid and assistance to many dioceses struggling to survive in some of the world’s most impoverished and war-torn areas. This support brings a glimmer of “hope” to a vast number of people whose living conditions might be considered “hopeless” by most of the world. As a first-time attendee, my eyes were truly opened to the importance of this mission and the contribution the Society makes towards it.

By contrast, the Lambeth Conference is a gathering of all bishops in the global Anglican Communion, which only occurs every ten or years or so and is held in the United Kingdom. The next Lambeth Conference is set to occur in 2020, and as a result most of our meeting was dedicated to this topic.

We heard presentations both on the history of the Lambeth Conference as well as the plans in place for the upcoming event. It’s a lifelong dream of many bishops in certain parts of the world to attend this Conference and to meet the Archbishop of Canterbury, but they are unable to do so due to a lack of funds within their diocese. The Compass Rose Society has established a scholarship fund to assist these dioceses in sending bishops to the Conference, making many of these dreams a reality. We also heard a very informative presentation on the state of the Anglican Communion from Archbishop Dr. Josiah Idowu-Fearon, Secretary General of the Anglican Communion.

The conclusion of our meeting was an Evensong celebrated by the Archbishop of Canterbury in the chapel at Lambeth Palace, which has been the official residence of the Archbishop for the past 800 years! The first Book of Common Prayer is widely believed to have been written by Thomas Cranmer (the Archbishop of Canterbury during Henry VIII’s reign) within the walls of this chapel. The opportunity to have experienced this Evensong in such a historically significant place was truly humbling.

Evensong was followed by a seated dinner hosted by Archbishop and Mrs. Welby at Skinners’ Hall, an historic guild house dating back to 1670. This is yet another venue steeped in history and to have the privilege of sharing a meal with our hosts in this setting was the perfect ending to an incredible day.

At the beginning of our trip, our eyes were focused on the magnificent seasonal beauty of London. By the time we departed, they had refocused on the centuries of history in this city and its role in the creation of the Church of which we are a part today. The Anglican Communion’s mission to make the world a better, more beautiful place is truly inspirational. The Compass Rose Society’s contribution to this effort is significant, and it was a privilege and honor for all of us to have been part of this experience. 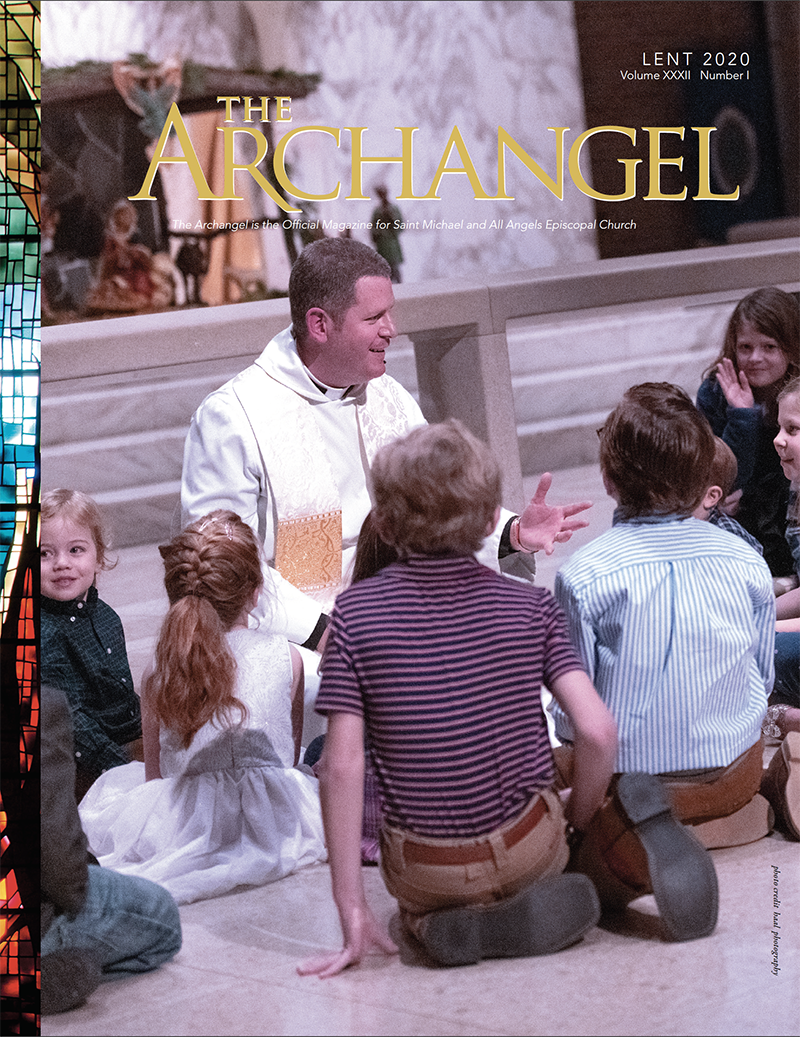 Instead of giving something up as our Lenten discipline, Rector Chris Girata offers a few ideas for how we can put into practice our call to discipleship during this Lent.

Thanks to the generosity of our parishioners, Saint Michael was able to provide significant aid to our community in the aftermath of last October's devastating tornadoes.

Women of the Passion

The Rev. Mary Lessmann explains the uniqueness and importance of the Women of the Passion service that will be offered Monday in Holy Week.

On behalf of the Mission & Outreach Committee, M&O Coordinator Christi Morrow announces the 2020 recipients of our Easter offering, 100% of which will be given away. This year's beneficiaries focus on the theme of addressing violence against women and human trafficking.