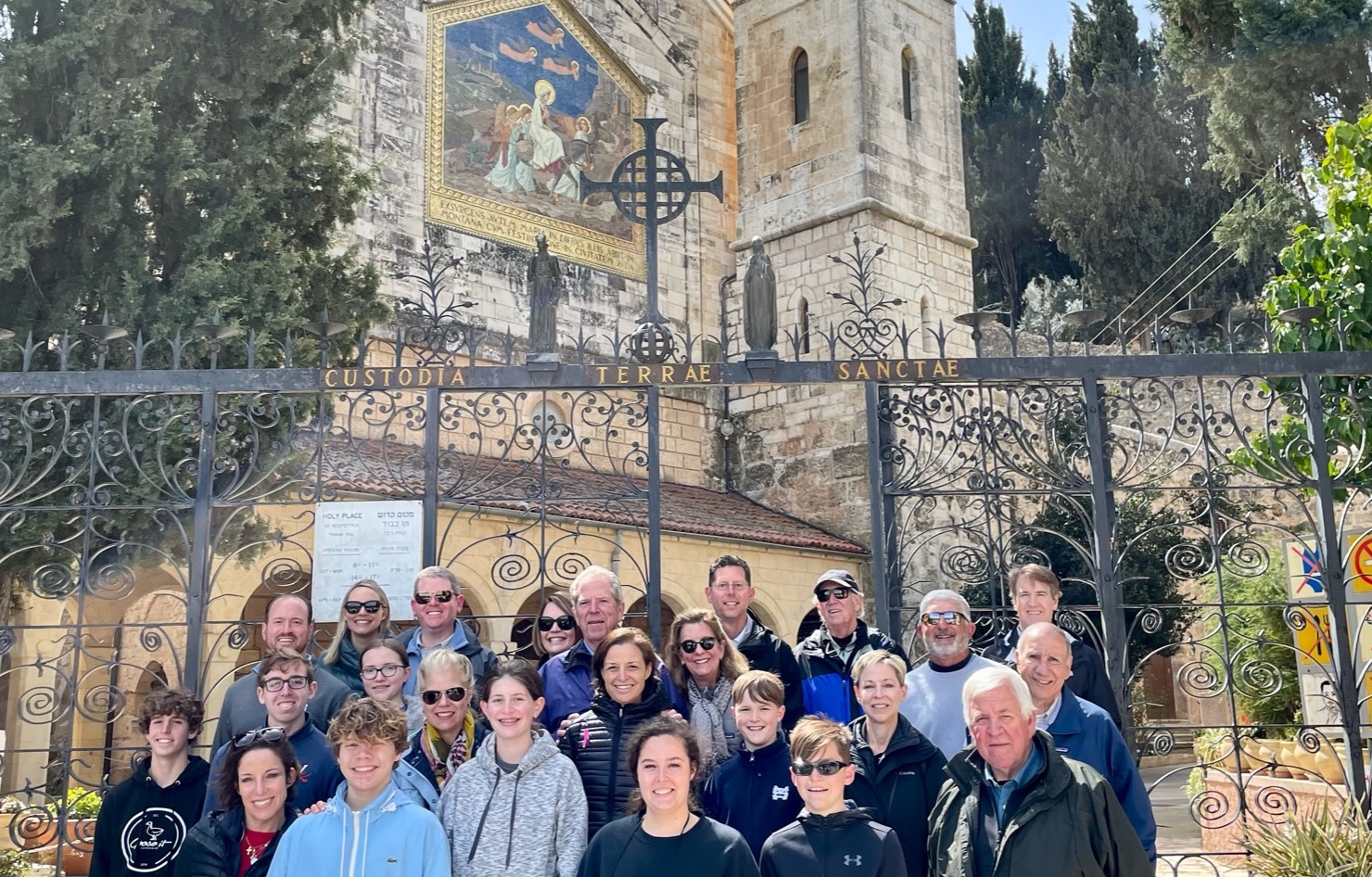 Although our trip officially ended on Saturday, most of our pilgrims opted to add Sunday and return to the US on Monday. The extra day allowed us to add some special stops to the pilgrimage.

We began by going to Ein Karem, a small community just outside Jerusalem. Located in the beautiful rolling hills, Ein Karem is where John the Baptist’s parents, Elizabeth and Zechariah, lived. 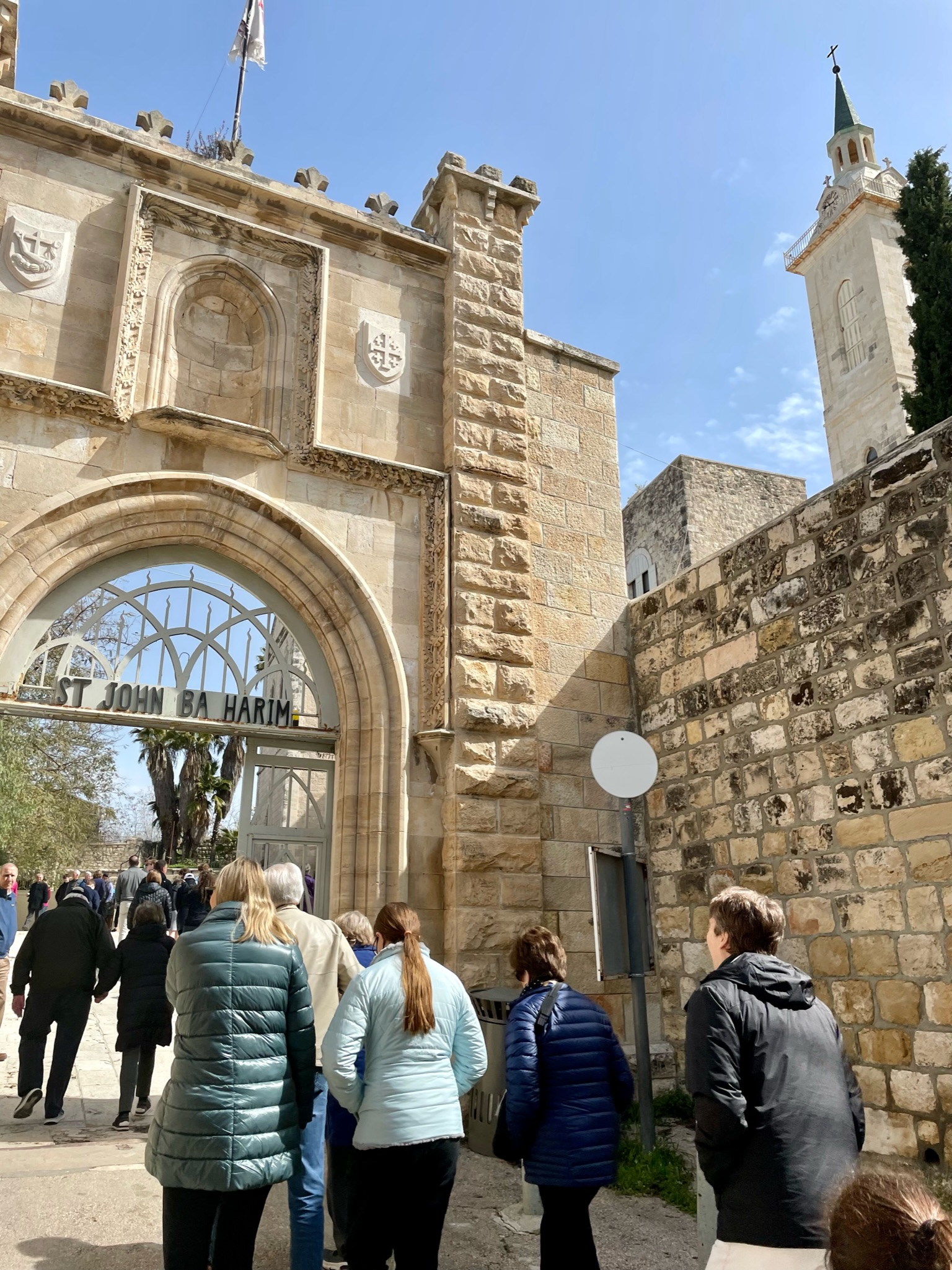 We visited the Church of St. John the Baptist, built on the site of his birthplace. It’s a gorgeous church with vivid blue tiles throughout the space. Around the church grounds is the Bendictus, also known as the Song of Zechariah, in dozens of languages. The effect is powerful, like the Lord’s Prayer through the grounds of the Church of the Pater Noster.

The second church in Ein Karem is the Church of the Visitation, far up the hill outside the small town. The church is built on the site where Mary visited Elizabeth while they were both pregnant. It’s a wonderful moment in the gospel narrative and gives us another great poem, the Magnificat, also known as the Song of Mary.

Mary set out and went with haste to a Judean town in the hill country, where she entered the house of Zechariah and greeted Elizabeth. When Elizabeth heard Mary’s greeting, the child leaped in her womb. And Elizabeth was filled with the Holy Spirit and exclaimed with a loud cry, “Blessed are you among women, and blessed is the fruit of your womb. And why has this happened to me, that the mother of my Lord comes to me? For as soon as I heard the sound of your greeting, the child in my womb leaped for joy. And blessed is she who believed that there would be a fulfillment of what was spoken to her by the Lord.” And Mary said, “My soul magnifies the Lord, and my spirit rejoices in God my Savior, for he has looked with favor on the lowliness of his servant. Surely, from now on all generations will call me blessed; for the Mighty One has done great things for me, and holy is his name. His mercy is for those who fear him from generation to generation. He has shown strength with his arm; he has scattered the proud in the thoughts of their hearts. He has brought down the powerful from their thrones, and lifted up the lowly; he has filled the hungry with good things, and sent the rich away empty. He has helped his servant Israel, in remembrance of his mercy, according to the promise he made to our ancestors, to Abraham and to his descendants forever.” (Luke 1:39-55)

The courtyard of the church has one of my favorite statues in Israel, featuring Mary greeting Elizabeth, with both women showing small baby bumps. Behind the statue the words of the Magnificat are displayed in dozens of languages. It’s such a wonderful space.

After visiting the church in Ein Karem, we went to two museums. First, the Israel Museum features art and archaeology that helped the pilgrims deepen their understanding of Israel in the first century. With a large, scale-model of Jerusalem as it was before Rome destroyed the city in 70 CE, we were able to connect the dots about Jesus’s life and the way culture would have functioned. The museum also features the Shrine of the Book, a display of Dead Sea Scrolls and other artifacts from the Essene community at Qumran.

In the afternoon, we visited Yad Vashem, the World Holocaust Remembrance Center. It’s a very well-designed center that invites visitors to consider the atrocities of the holocaust beyond horrible statistics, but rather to dig deeply into human motivation. In other words, the goal of the center is not only to present the historical details of the holocaust, but to inspire visitors to remain active and engaged in the world so nothing like it happens again.

It may seem like an odd way to end a pilgrimage that followed the footsteps of Christ, but it was intentional. Our Christian discipleship calls us to love God and our neighbor, and love is an action, not just intellectual or emotional assent. As disciples, to love means to engage the world as it is and help make it as we believe God hopes it to be. The holocaust is one of many stains on our collective human history when we have fallen grossly short of the loving world God hopes for us. By learning about past mistakes, we can work to be better in the future. To truly follow in the footsteps of Christ means that we take action to help bring about God’s loving kingdom now.

I know that this trip has made a deep impact on our pilgrims, and I hope you’ve gained from following along here, too. May we continue to follow in Christ’s footsteps each and every day!