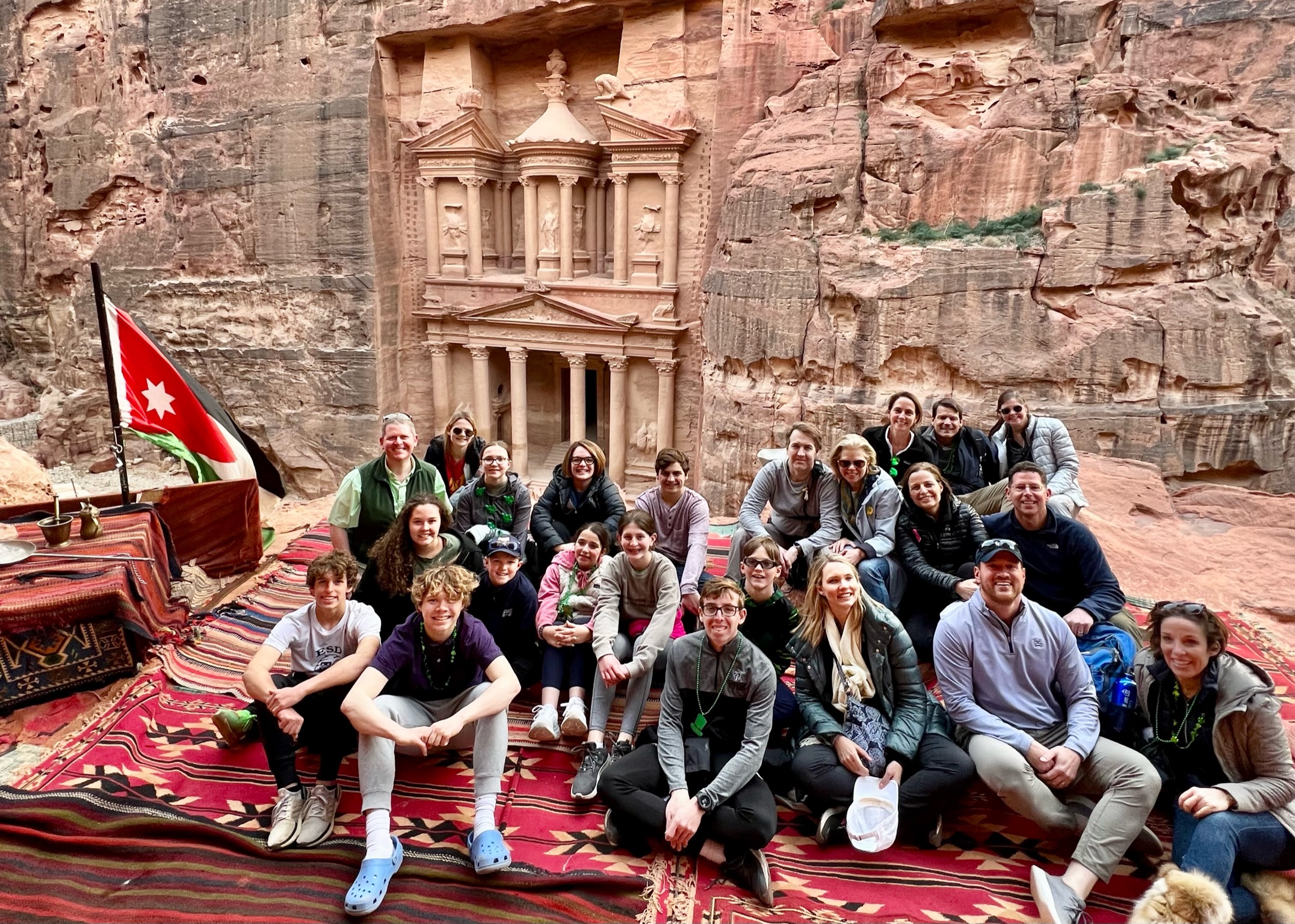 Our trip is primarily a Christian pilgrimage, tracing the footsteps of Christ. However, we occasionally step off that Christian path to have a little fun. On day seven, we stepped off the path and took a quick trip to Jordan to visit Petra. Jordan is directly east of Israel and has had a cooperative, diplomatic relationship for more than fifty years.

We got up early in Galilee and drove south to the border crossing at the Allenby Bridge, just north of the Dead Sea (known in Jordan as the King Hussein Bridge). Although international border crossings are formal occasions, I was grateful that crossing into Jordan is typically easy, even if it’s a bit slow. After entering Jordan, we drove south through the Jordan Rift Valley to Wadi Musa, the town closest to Petra. In English, Wadi Musa means “the Valley of Moses,” and it is the site of Moses’s well (Numbers 20) and the tomb of Aaron, Moses’s brother. 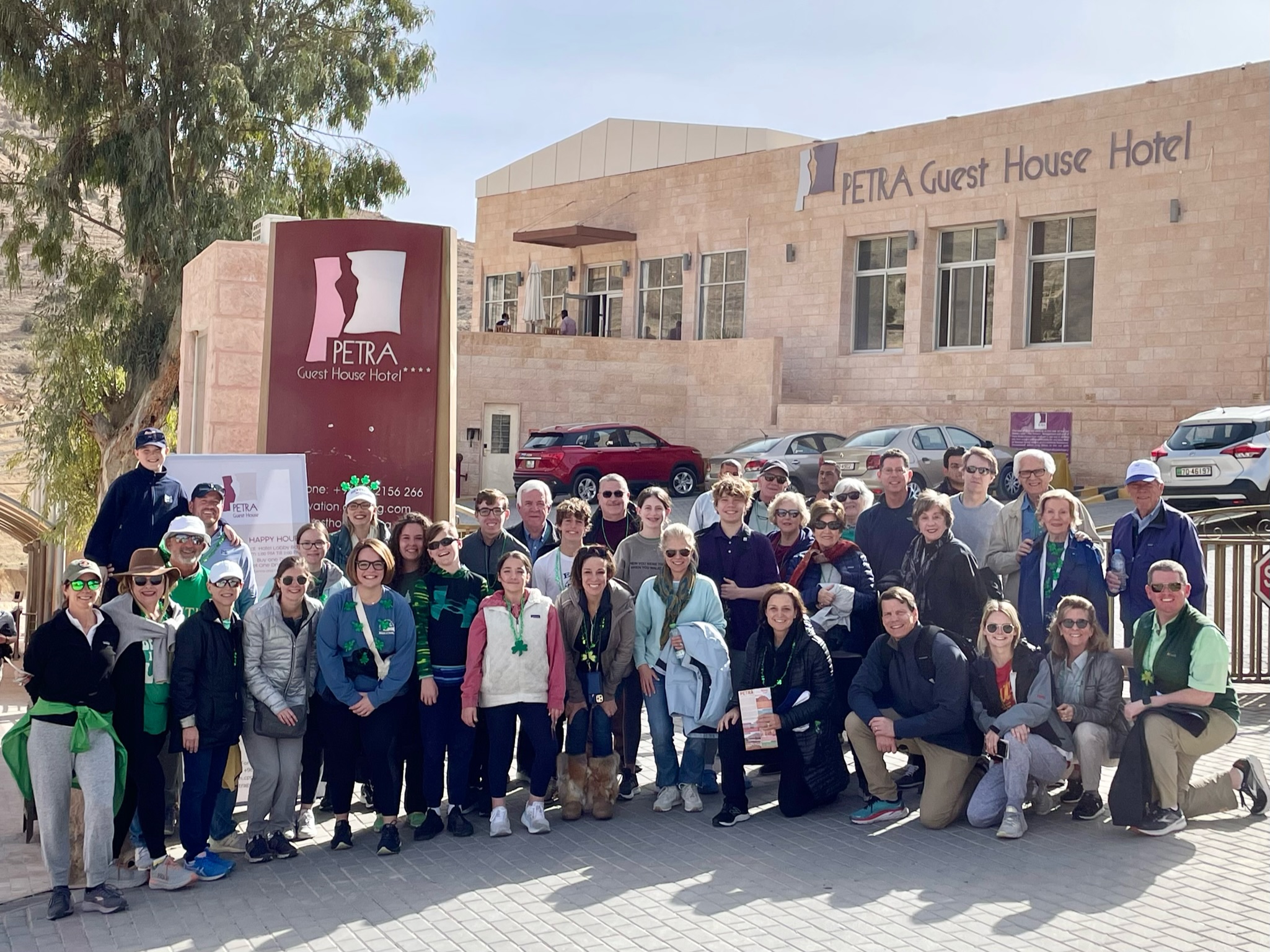 Petra is a fantastic site and is one of the New Seven Wonders of the World. Archaeological evidence shows that humans have inhabited the area of Petra for more than 9,000 years, but the incredible rock-cut architecture for which Petra is so well known was carved between 100 BCE-100 CE. The name, Petra, is the Greek word for “rock” and was attached to the city by the time the Roman Empire was established.

The connection to the Bible is rooted primarily in the Old Testament. Josephus, a first-century CE Jewish historian, identified one early group living in Petra as the Midianites during the time of Moses and was named Rekem. Later, before (and possibly during) the life of Christ, the city may have been called Sela and referenced in 2 Kings 14. By 400 BCE, the Nabataeans settled in Petra and expanded the power and authority of the kingdom. They are responsible for its complex architecture and physical expansion because of their ability to collect surface water from miles around to support the population. The Nabataeans were excellent traders and merchants, and would have been important to trade routes between Africa and Asia. It’s highly unlikely that there was much connection between Jesus and the Nabataean people, but it’s great to visit anyway.

By the time we arrived in Petra, we have been in the bus for hours and were ready to stretch our legs. Petra is essentially a national park, so after a quick lunch, we began our walk. From the gate of the park to the beginning of the ancient city is about 1.5 miles and is accessible only by foot or in horse-drawn carts that look like rickshaws. Half of that walk is an incredible trail through a high-walled canyon named the Siq (pronounced “seek”) that led us straight to the most iconic building of all, the Treasury, made famous in Indiana Jones and the Last Crusade.

At the Treasury, our group hopped on thirty camels to take us deeper into the city. I have to say that being part of a 30-camel caravan through Petra is one of the most unique experiences I’ve ever had. If you want to see pure delight on anyone’s face, regardless of age, put them on a camel with a big group and go cheering through one of the wonders of the world. It was amazing!

After our most excellent camel ride, we climbed multiple flights of steps up to a much higher level to see the Urn Tomb. Named for the urn that was carved above the main columns, the beautiful space was one of the royal tombs of Petra, likely the tomb of King Malchus II, a Nabataean king who died around 70 CE. Later, in the fifth century CE, the space was repurposed as a Byzantine church.

The rock carving in Petra is absolutely exquisite, not only for the sculptural skill it took to create them, but for the colors contained in the stone. Petra is nearly all sandstone, but the mineral-rich sandstone exposes layers of yellow, purple, brown, and pink that flow together like ribbons of fudge. As our pilgrims explored the area, I could see the fascination on every face. To be in a place so ancient and so spectacular is a gift, and I was glad to share it with this amazing group.