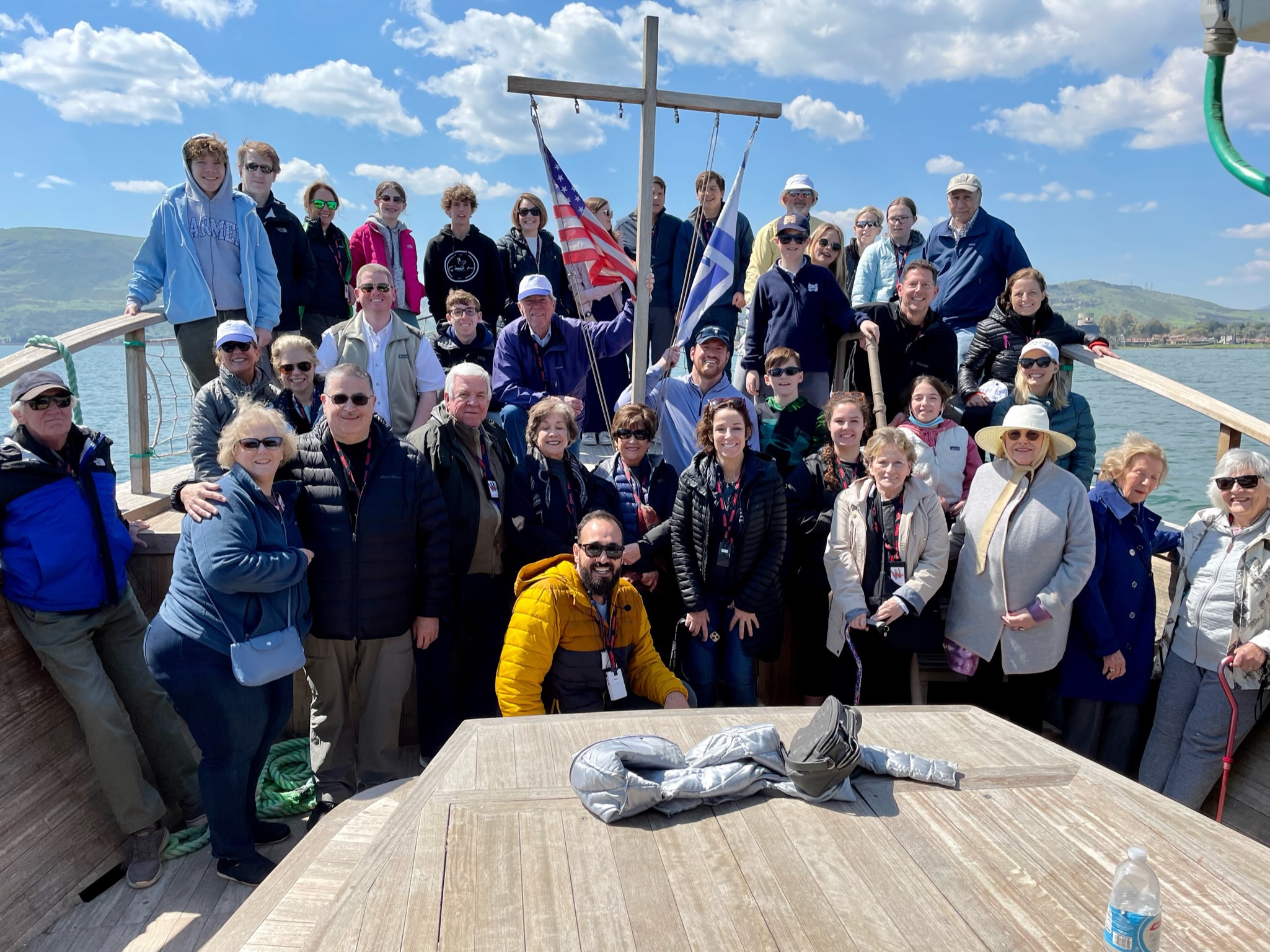 We began our day in Capernaum, the “Town of Jesus.” 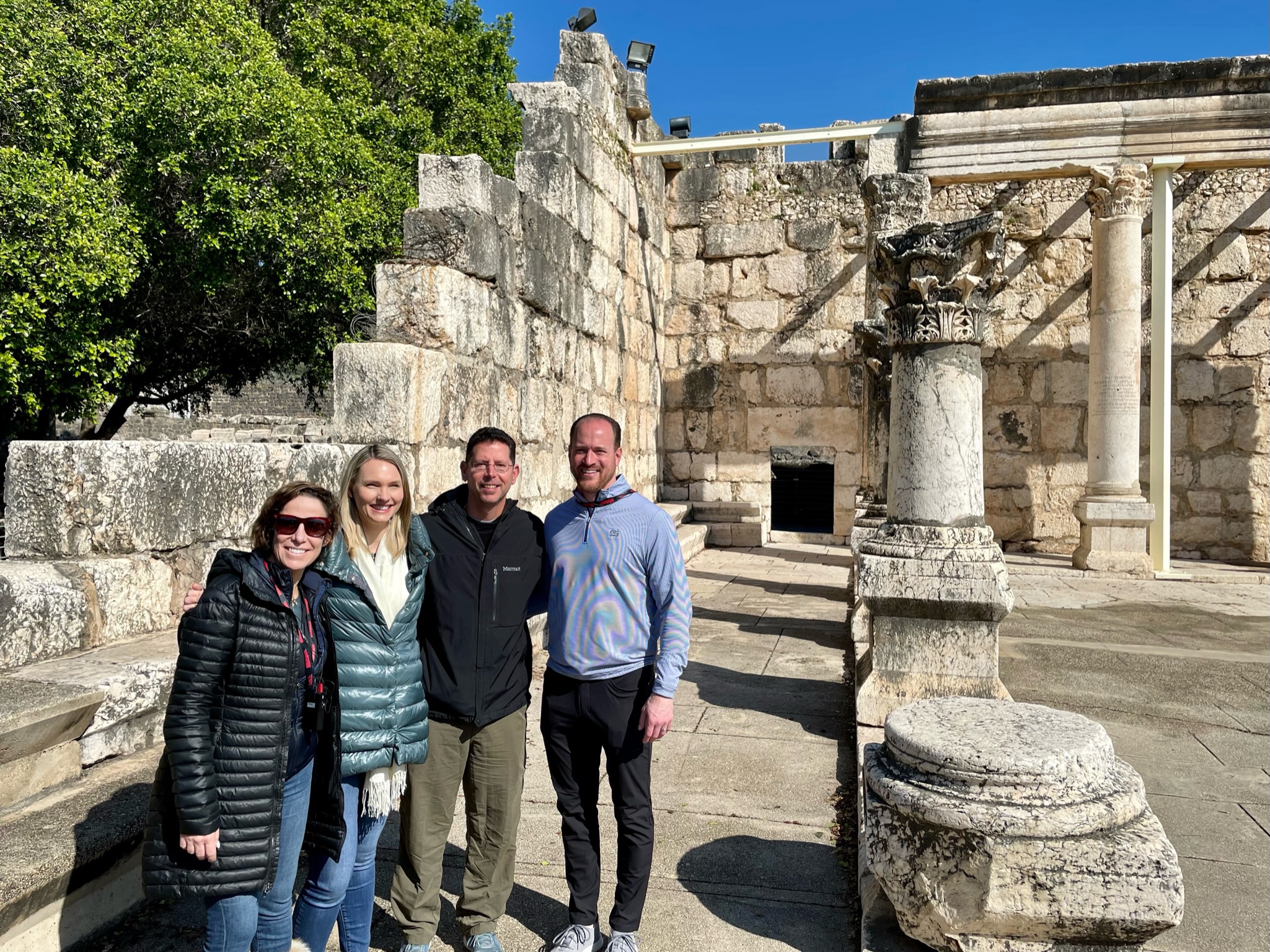 Located the northwestern shore of the Sea of Galilee, Capernaum is believed to be the place where Jesus lived most often during his public ministry. It was the hometown of Matthew, and very near Bethsaida, the hometown of Peter, Andrew, James, and John. It’s also where Jesus performed many miracles, documented clearly in the Gospel of Luke:

He went down to Capernaum, a city in Galilee, and was teaching them on the sabbath. They were astounded at his teaching, because he spoke with authority. In the synagogue there was a man who had the spirit of an unclean demon, and he cried out with a loud voice, “Let us alone! What have you to do with us, Jesus of Nazareth? Have you come to destroy us? I know who you are, the Holy One of God.” But Jesus rebuked him, saying, “Be silent, and come out of him!” When the demon had thrown him down before them, he came out of him without having done him any harm. They were all amazed and kept saying to one another, “What kind of utterance is this? For with authority and power he commands the unclean spirits, and out they come!” And a report about him began to reach every place in the region.

After leaving the synagogue he entered Simon’s house. Now Simon’s mother-in-law was suffering from a high fever, and they asked him about her. Then he stood over her and rebuked the fever, and it left her. Immediately she got up and began to serve them. 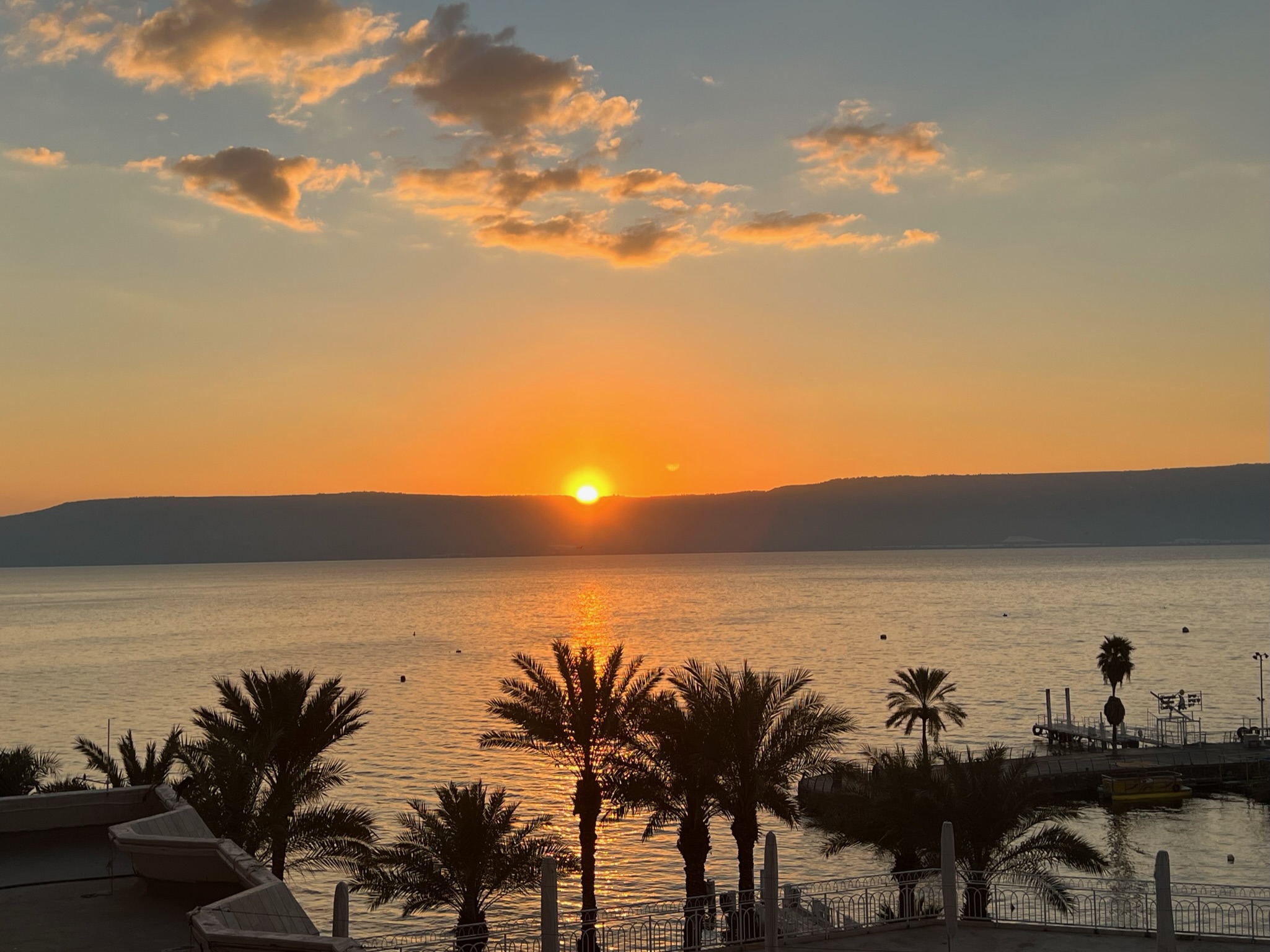 As the sun was setting, all those who had any who were sick with various kinds of diseases brought them to him; and he laid his hands on each of them and cured them. Demons also came out of many, shouting, “You are the Son of God!” But he rebuked them and would not allow them to speak, because they knew that he was the Messiah.

One day Jesus was teaching, and Pharisees and teachers of the law were sitting there. They had come from every village of Galilee and from Judea and Jerusalem. And the power of the Lord was with Jesus to heal the sick. Some men came carrying a paralyzed man on a mat and tried to take him into the house to lay him before Jesus. When they could not find a way to do this because of the crowd, they went up on the roof and lowered him on his mat through the tiles into the middle of the crowd, right in front of Jesus. When Jesus saw their faith, he said, “Friend, your sins are forgiven.”

The Pharisees and the teachers of the law began thinking to themselves, “Who is this fellow who speaks blasphemy? Who can forgive sins but God alone?” Jesus knew what they were thinking and asked, “Why are you thinking these things in your hearts? Which is easier: to say, ‘Your sins are forgiven,’ or to say, ‘Get up and walk’? But I want you to know that the Son of Manhas authority on earth to forgive sins.” So he said to the paralyzed man, “I tell you, get up, take your mat and go home.” Immediately he stood up in front of them, took what he had been lying on and went home praising God. Everyone was amazed and gave praise to God. They were filled with awe and said, “We have seen remarkable things today.” (Luke 4:31-41, 5:17-26)

Capernaum is certainly the town in which Jesus spent a significant amount of time. After his death and resurrection, it’s believed that Peter’s mother-in-law’s house became one of the earliest house churches. Over time, this site was expanded and developed by faithful Christians, with multiple churches being built over the site during the next five centuries. Today, the original first-century building has been excavated and can be seen outside a memorial church that was suspended over the site in the 1980s.

Next, we traveled to Tabgha on the shore of the Sea of Galilee. 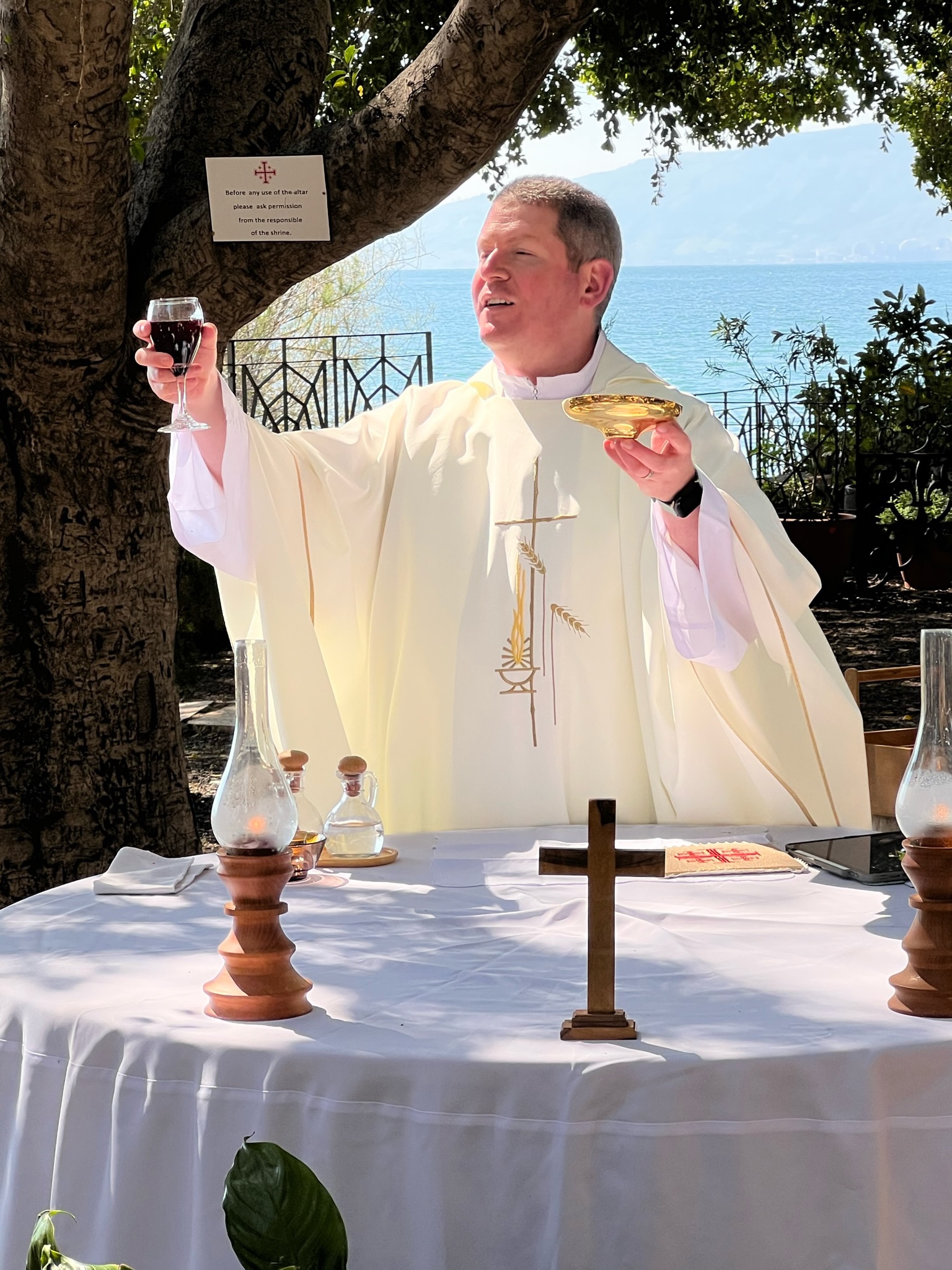 This was the site where Jesus called his first disciples—Peter, Andrew, James, and John—and where he performed the miracle of the multiplication, feeding more than 5,000 with five loaves and two fish. Being down on the shore of the Sea of Galilee is always a moving experience. This time, we celebrated Holy Eucharist in a chapel directly next to the sea! It was amazing to be in the place where Christian discipleship began and to be celebrating our own faithfulness together. There were many tears shed and I think everyone will remember the experience for the rest of their lives. 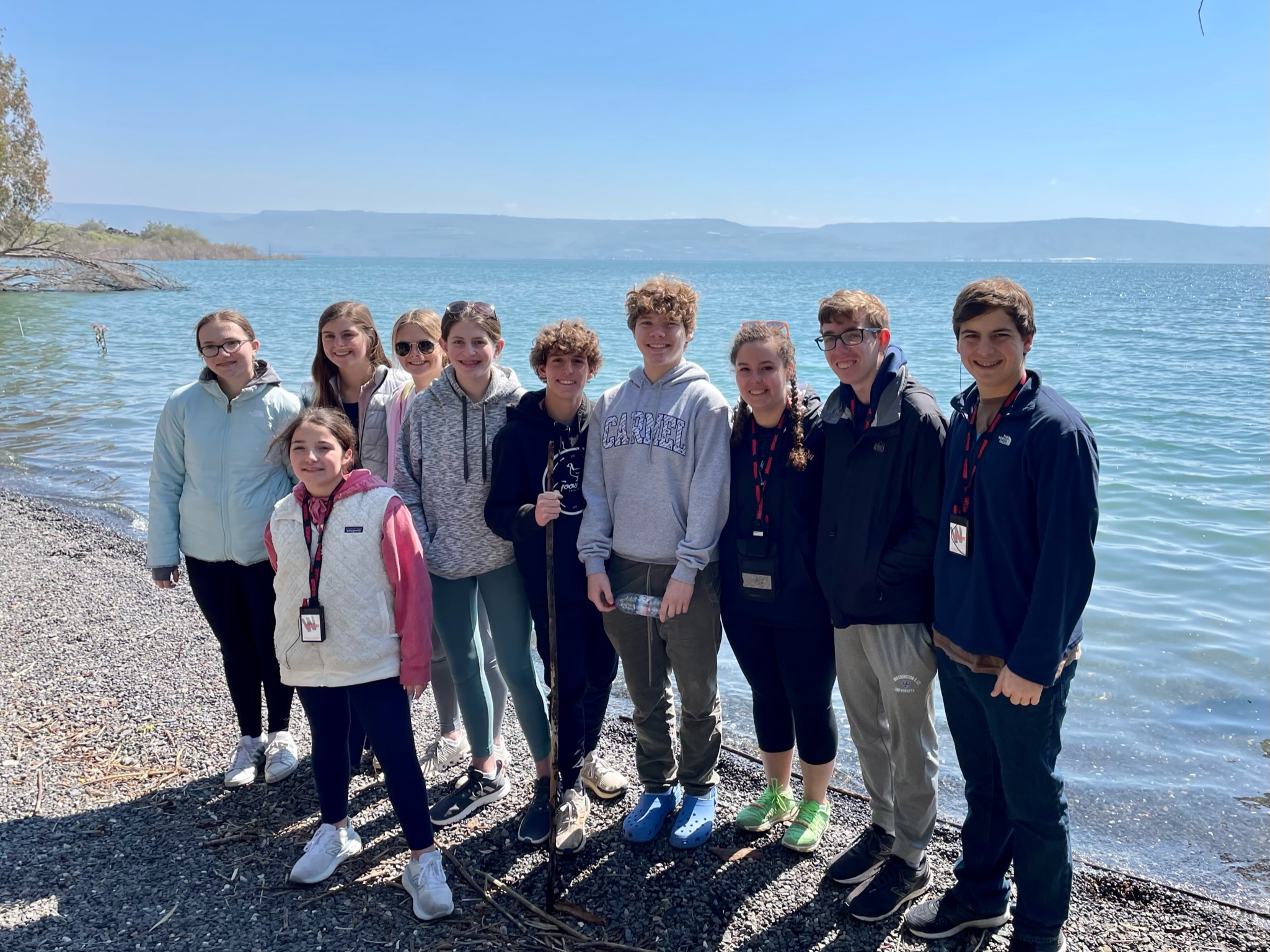 After pictures on the shore, we took a boat ride on the sea. The weather was absolutely stunning, so the time out on the water was excellent. We sang a few songs, and many in our group danced the Havah Nagilah with members of the boat crew. Sailing along the water, we recalled the miracle of Jesus walking on the water to the disciples. 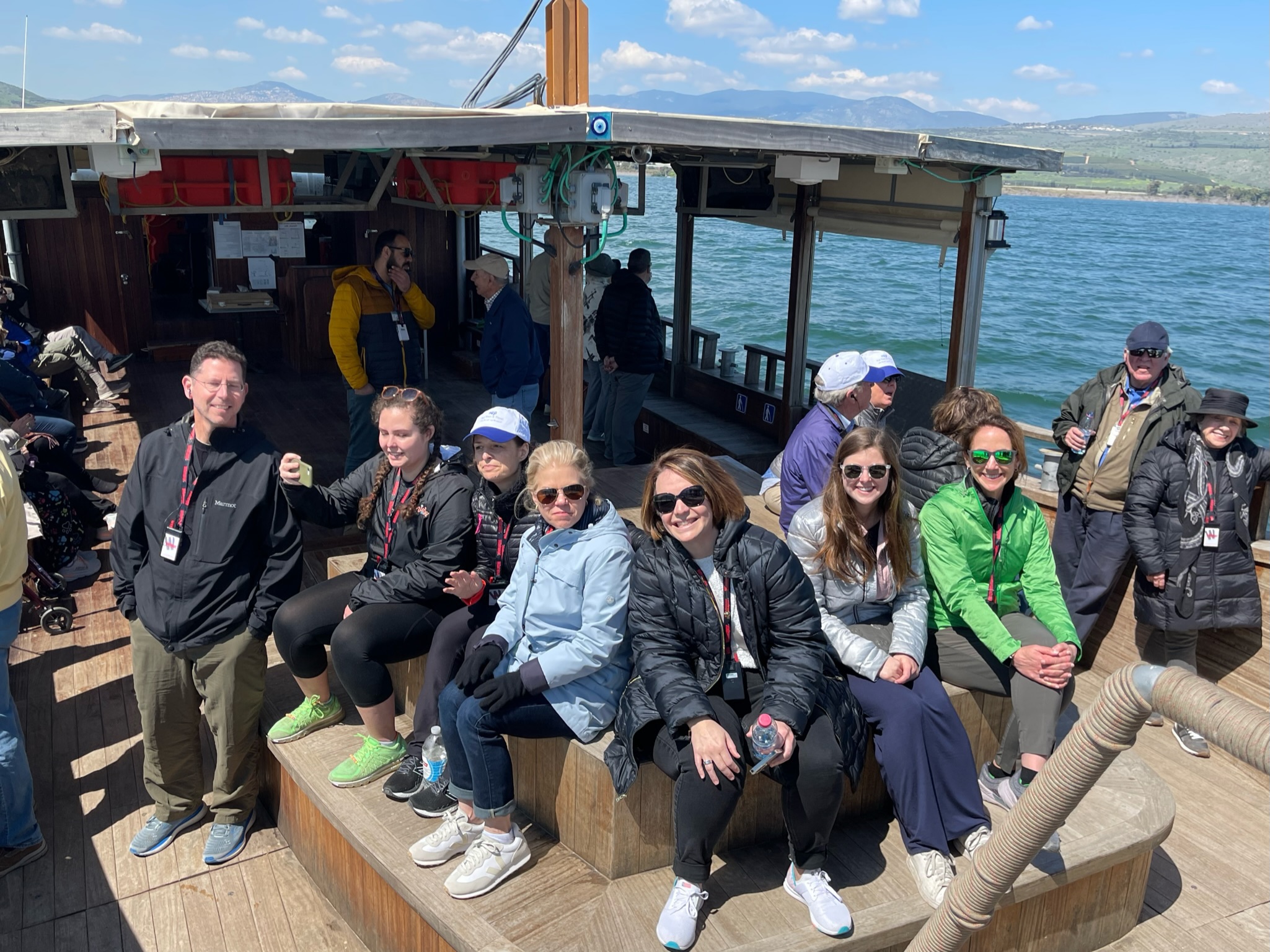 We could imagine what a stunning sight it would have been for the disciples to see Jesus walking across the surface straight to them!

We ended the day on top of the Mount of Beatitudes. The most important single teaching Jesus offered is the Sermon on the Mount found in Matthew, and he offered that teaching on top of a hill overlooking the Sea of Galilee. It’s a beautiful place—truly stunning—and today, has been made into a sprawling garden maintained by the Franciscan Missionary Sisters of the Immaculate Heart of Mary. 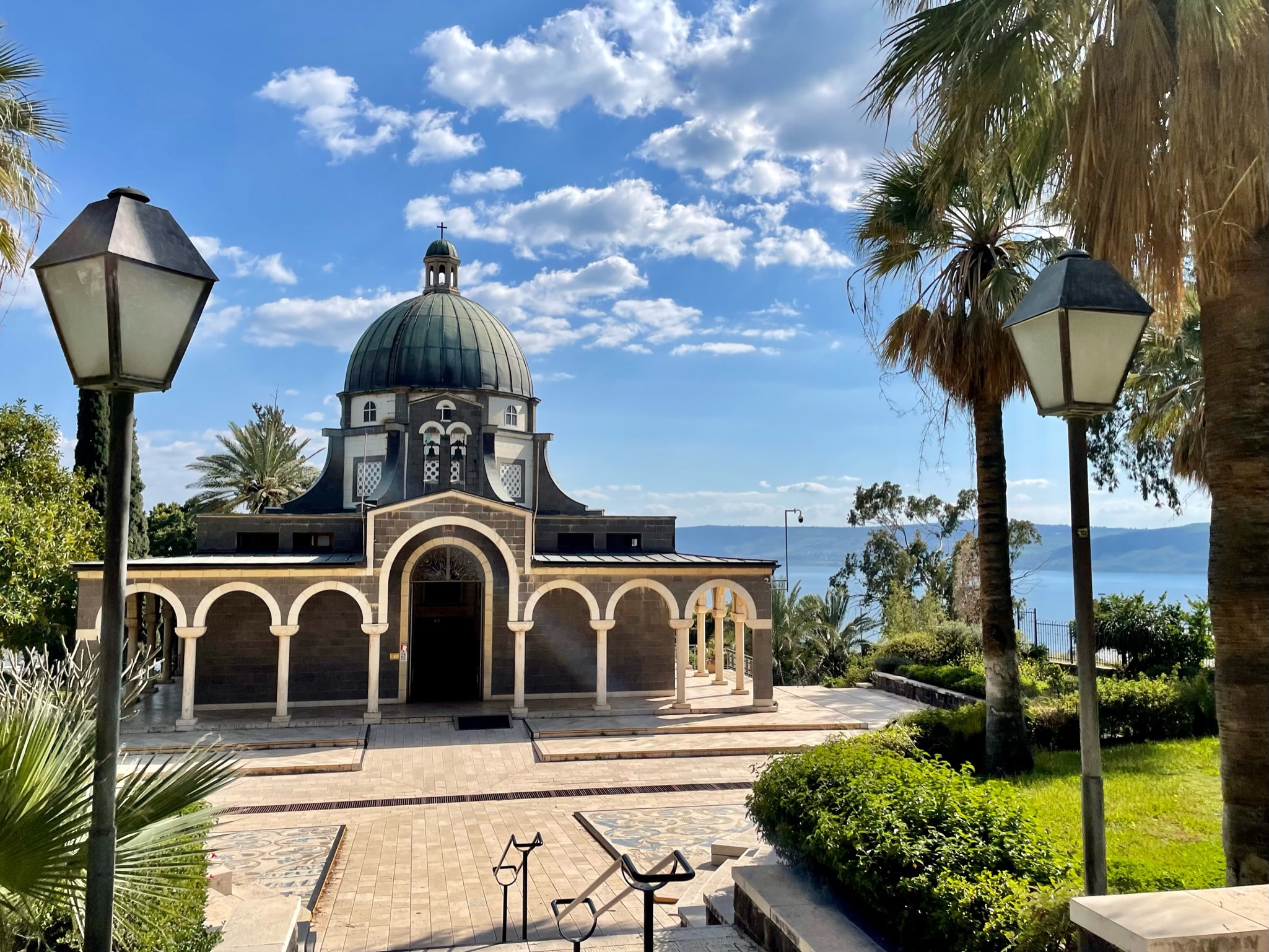 The garden contains many walking paths with stones along the path that quote from the beatitudes themselves. Visitors are invited to quietly move along the paths and meditate about the powerful words of Christ that continue to impact the world. One of the topographic features that I find most striking about the mountain is seeing the volcanic rocks scattered all around the hillside. Before I first visited Galilee, I imagined it to be grass-covered rolling hills. Instead, large volcanic stones sit everywhere, and those listening to Jesus would have been sitting on the stones or leaning against them during his teaching. I loved watching our pilgrims sit quietly, gazing out on the Sea of Galilee, perhaps praying softly. The power of this place continues to amaze me.