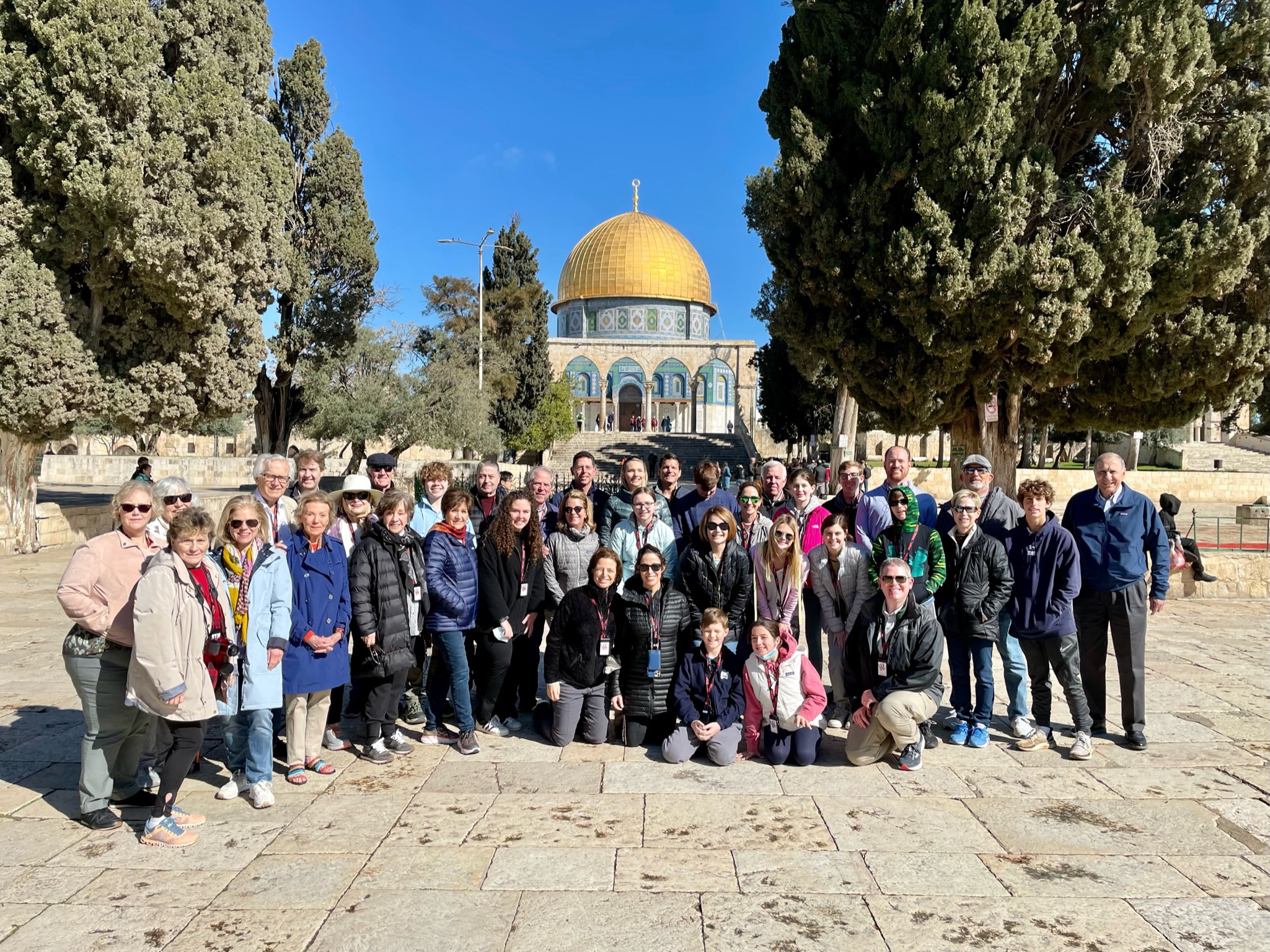 Day three began with a walk to the Temple Mount. One of the holiest sites for Jews and Muslims, the Temple Mount is perhaps the most contested property on the planet. Today, this holy site features the iconic Dome of the Rock and the more simple Al-Aqsa Mosque. Because of it’s sacred identity and governing authority, there hasn’t been any modern excavation of the site. Most of what we believe about the Mount itself is based on biblical stories and oral history. Here’s a summary:

During the Israelite Kingdom Period, King David unified the twelve tribes of Israel into a single nation and named Jerusalem its capital. David brought the ark of the covenant to Jerusalem, but it was his son, King Solomon, who built the First Temple on what is the Temple Mount. That building was destroyed by the Babylonians in the 6th century BCE. Following the Exile, the Second Temple was built in the same place. The rebuilt temple was less than ideal, and we read in Ezra 3:12 that some of “the old people who had seen the first [temple] wept with a loud voice” when they saw it rebuilt. We don’t know just how different the rebuilt temple was, but a few centuries later, Herod the Great made it truly grand.

Beginning a few decades before the birth of Jesus, Herod the Great sought to expand the Second Temple into a glorious place—and he did. By the time of Jesus’s ministry, the Temple was a shining example of the power of the Jewish state under Herod’s rule. It was this Temple where Jesus would have been presented as a newborn, where he taught as a child, and where he turned over the table of the money changers. The Second Temple was the center of Jewish life until it, too, was destroyed, this time by the Romans in 70 CE.

After the destruction of the Second Temple, the Mount was used and reused by multiple Roman emperors pagan displays, but nothing of substance was built there until the 7th century when a simple mosque was built on the southern end, and later, a shrine was built over the Foundation Stone. This stone, originally under the Temple, is believed to be where heaven and earth touch and where the creation of the world began. It’s also believed to be the stone on which Abraham prepared to sacrifice Isaac, where Jacob wrestled with God, and where Muhammad went on his night journey. Today, that shrine dominates the skyline of the Old City of Jerusalem and remains under Muslim authority.

The Saint Michael pilgrims gathered on the Temple Mount between the shrine and the mosque to learn its dynamic history and how the site functions today. They also learned about how the Jewish people seek to pray as close to where the Temple had been as possible, which is a retaining wall on the west that we now refer to as the Western (or Wailing) Wall. Although we are not allowed to pray on the Mount, we felt God’s holy presence and it was a privilege to be there.

From the Temple Mount, we traveled east out of the Old City to St. George’s Cathedral, the seat of the Anglican Diocese of Jerusalem. One of our sister churches, St. George’s Cathedral is a beautiful space that has supported faithful disciples for more than a century as they witness to the love of Christ in one of the most difficult areas of the world. I was privileged to vest for the service and proclaim the Gospel, and Archbishop Hosam Naoum celebrated the Eucharist. It was a wonderful way to center ourselves in the early part of our pilgrimage.

Following the Eucharist service, we headed east out of Jerusalem toward the Dead Sea. The Dead Sea is the lowest point on earth, with a drop in elevation from Jerusalem of nearly 4,000 feet. We went to float in the Dead Sea first, a real treat. At nearly ten times saltier than an average ocean, the water in the sea creates a high buoyancy so anyone floats without any effort—it’s quite the ride! The salty environment also creates a minerality that has been touted as an exceptional skin treatment. Many of our pilgrims spread the mineral-rich mud on their skin and came out even prettier.

After a quick dip and mud bath in the Dead Sea, we headed off to Masada. The ruins of Masada are part of an interesting story that connects with Judaism soon after Jesus’s death and resurrection, and could have played a role in the spread of Christianity. Jewish rebels fought the Roman occupation of Judaea at the time of Jesus’s ministry, but their rebellion really heated up in the 60s CE. After successfully defeating a Roman garrison, the Jewish rebels incited the force of Rome’s army, and in 70 CE, Rome sacked Jerusalem and destroyed the Second Temple. Just a few years later, in. 73 or 74, the Roman army chased the rebel Jewish forces to Masada, once Herod’s winter palace. After laying siege for 2-3 months, the Romans were able to force their way into Masada, only to find that the nearly one thousand Jewish rebels had either committed mass suicide or orchestrated a killing that landed all but a handful of women and children dead. To this day, Masada is an excellent example of first-century ruins that help us understand more about the world in which Jesus lived.