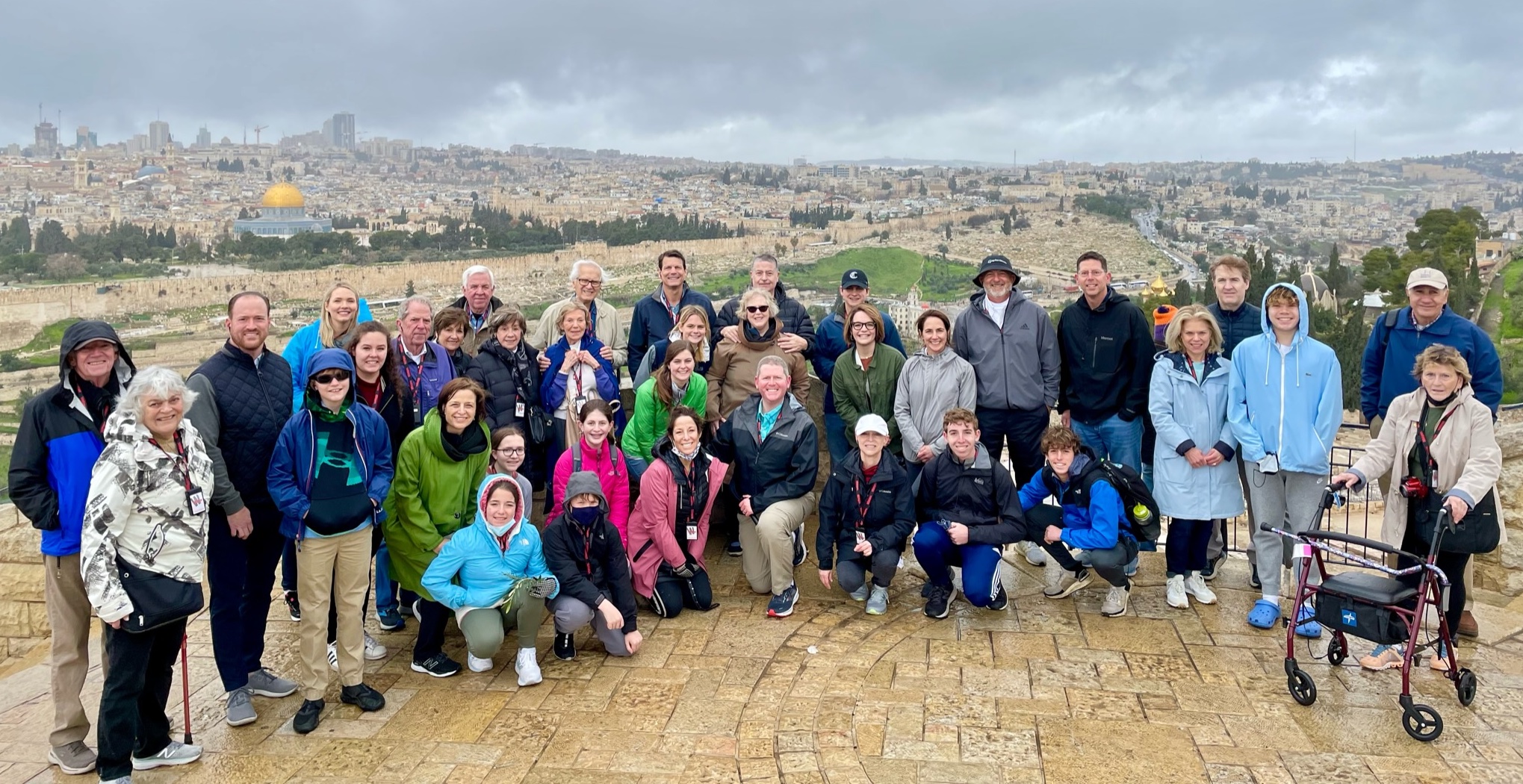 Before we get to the official tour, I want to make a quick and important note: The Christian sites we visit are ones that have—on the whole—been identified for around 1600 years. All you math sleuths will see that there is a 400ish-year gap between Jesus’s life and these sites. Until Christianity was legalized in the Roman Empire, Christians often met in secret for fear of retribution. Once their faith practices were legalized, Roman authorities, such as Emperor Constantine’s mother, Helena, began to track down sites of special importance. Wherever Christians gathered to remember a special moment in Jesus’s life, Roman leaders would plant a flag and most often build a church. Modern pilgrims, like us, visit holy sites that trace their roots back to the fourth century and later. As you will see along the way, the churches, chapels, monasteries, and the like that have been built upon holy sites can often cover up what was original. Regardless, being there is incredibly special and I hope you will be inspired as much as we are.


We are so lucky to be in the Holy Land at this time. The pandemic closed holy sites around the country and most remained closed for the last two years. Thankfully, as the omicron variant’s surge waned, Israel began to relax restrictions. Only two weeks ago, Israel reopened all the holy sites. Most pilgrimage groups had delayed their trip indefinitely, but we are not like most. We kept the faith that we would be able to travel here in March, and it looks like it was a brilliant gamble. What is typically a zoo of people from around the world is not nearly empty. There are virtually no crowds, which means our access is unparalleled. The pictures you will see along our trip are not normal because pilgrims normally swamp every holy site. I will try to describe as much as I can along the way.

Our first official day of touring began at the Chapel of the Ascension on the Mount of Olives. The ascension of Jesus is recounted in multiple books of the Bible. Luke writes about it in both his Gospel and in the Acts of the Apostles:

After his suffering, Jesus presented himself alive to his apostles by many convincing proofs, appearing to them during forty days and speaking about the kingdom of God... When they had come together, they asked him, “Lord, is this the time when you will restore the kingdom to Israel?” He replied, “It is not for you to know the times or periods that the Father has set by his own authority. But you will receive power when the Holy Spirit has come upon you; and you will be my witnesses in Jerusalem, in all Judea and Samaria, and to the ends of the earth.” When he had said this, as they were watching, he was lifted up, and a cloud took him out of their sight. (Acts 1:3, 6-9)

Today, the chapel is located on top of the rock where early Christians believed Jesus last touched the earth physically. In fact, there is a small stone in the floor of the chapel that is believed to be the footprint of Christ. Can you see it in the picture? Inside the chapel, we were all by ourselves, which meant we were able to read the scripture story from Luke and say a special prayer for the ascension.

Next, we walked down the street to the Church of the Pater Noster. Also on the Mount of Olives, this church is built on the site where early Christians believe Jesus first taught his disciples the Lord’s Prayer. Pater Noster means “Our Father” in Latin, and the church is a tribute to this most holy prayer. Lining the walls of the church, hallways, and courtyards is the Lord’s Prayer in 140 different languages from around the world. The pilgrims climbed down into the grotto below the courtyard to be near the rock upon which the early Christians believed Jesus sat to teach (the group picture is in the grotto). Since we were the only people in the courtyard, we were able to spend extra time, including praying the Lord’s Prayer together. It was incredibly special.

Before we left the Mount of Olives, we walked to a beautiful overlook of the Old City of Jerusalem. Unfortunately, the weather was a bit crummy this first day, but we grabbed a group picture in front of the Temple Mount anyway!

We hopped back the bus for the relatively short ride out of Jerusalem and into Bethlehem. We went straight away from Shepherd’s Field. This is the site where early Christians celebrated the appearance of the angel of the Lord to the shepherds. The angel said to them, “Do not be afraid; for see—I am bringing you good news of great joy for all the people: to you is born this day in the city of David a Savior, who is the Messiah, the Lord. This will be a sign for you: you will find a child wrapped in bands of cloth and lying in a manger.” And suddenly there was with the angel a multitude of the heavenly host, praising God and saying, “Glory to God in the highest heaven, and on earth peace among those whom he favors!” (Luke 2:10-14)

Shepherd’s Field has a beautiful chapel built above a very simple chapel set in an ancient cave. We gathered in both spaces and were able to sing “Angels we have heard on high” together! We also climbed through a network of caves and tunnels throughout the field. These old caves and tunnels were used by shepherds to protect their sheep, and may have even been used by early Christians who met in secret for fear of persecution. Today, they offer a lot of fun for the young and young-at-heart. I know I enjoyed myself!

After a big lunch at The Tent Restaurant, we headed to the Church of the Nativity. Built on the site of Jesus’s birth, the Church of the Nativity is more popular than any other Christian holy site except the Church of the Holy Sepulchre (built where Jesus was crucified and buried). When we think of the manger, we often have in our minds a barn full of hay and a wooden trough in which the newborn Jesus was laid. It is most likely, however, that Jesus was born in a cave where the whole family would have been safe from the elements and from wild animals.

Today, pilgrims can climb down steep stairs below the altar of the church to see the small cave in which Jesus was born. Two spots hold particular important: where Jesus was born and where he was placed in the manger. Both stones are available to see and to pray over, which we did. What can sometimes take three to four hours in line to see only took us a few minutes, and you can see in the group picture that no one else was waiting behind us! I continued to be amazed at how empty the holy sites were.

Within the same Nativity compound is a Roman Catholic church with multiple sites of importance to Christian history, in particular the grotto in which St. Jerome translated the first Latin Bible (the Vulgate) in the late 4th century. His translation is incredibly important because, at the time, most Christians were reading translations of translations. St. Jerome used the original Hebrew and Greek texts to create a Latin Bible that became influential across the Christian world for centuries.