On Thursday, January 17, the Women of Saint Michael hosted the second annual Interfaith Panel: Islam, Judaism, and Christianity - The Conversation Continued. The event brought in hundreds of attendees representing each of our faiths to see panelists Rabbi Nancy Kasten, Imam Omar Suleiman, and our own Rev. Dr. Chris Girata. The conversation was moderated by The Rev. Amy Heller. See pictures from the event on Facebook.

Rabbi Nancy Kasten is a community educator, volunteer, and activist. Ordained by the Hebrew Union College- Jewish Institute of Religion in 1990, she spent her first 12 years as a rabbi at SMU. During that time she served as Hillel Director, Associate Chaplain, and Adjunct Professor of Biblical Hebrew. Following her tenure at SMU Rabbi Kasten worked as Campus Rabbi and Head of Jewish Studies at the Wise Academy, a Reform Jewish Day School. In recent years her focus has been on the intersection between mindfulness and social justice. She teaches Jewish Mindfulness, and currently serves on the advisory committees of several Jewish and Interfaith organizations. She is married to Rabbi David Stern and they have three children.

Omar Suleiman is a world-renowned Islamic scholar from New Orleans, Louisiana. Over the last 14 years, his journey of pursuing traditional Islamic learning has led him to spend years in the United Arab Emirates, Jordan, and Malaysia. Upon becoming certified in various traditional sciences, he completed a Bachelors degree in Islamic law, Accounting, a Masters degree in Islamic finance, and is in the process of completing his PhD from the Islamic University of Malaysia.

Upon returning to New Orleans, he served as the Imam of the Jefferson Muslim Association in New Orleans for 6 years and was also the Director of the Muslims for Humanity Hurricane Katrina Relief effort. It was in this time that he was noted on a national level as being a strong advocate of community service, interfaith dialogue, and social justice. He co-founded the East Jefferson Interfaith Clergy Association and was awarded for his outstanding civic achievement by the Mayor and City Council of New Orleans in 2010. He has since been a guest at various national functions to share his experiences in community building.

In the year 2012, Sh. Omar moved to Dallas where he established the Islamic Learning Foundation of Texas and dedicated himself fulltime to teaching with several prestigious international institutions of higher learning such as Mishkah University, AlMaghrib Institute, and Bayyinah Institute. He also currently serves as the Resident Scholar of the Valley Ranch Islamic Center, Co-Chair of Faith Forward Dallas at Thanks-Giving Square, and founder of MUHSEN (Muslims Understanding and Helping with Special Education Needs). 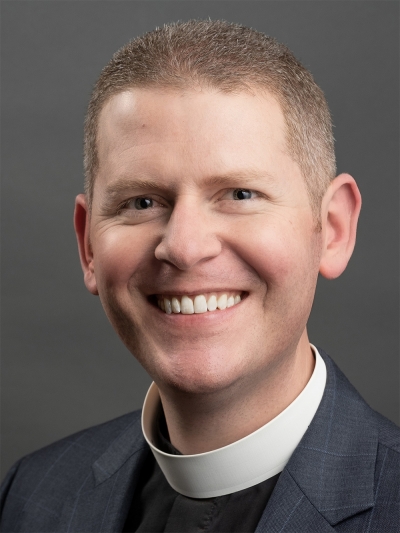 
The Rev. Dr. Chris Girata was called to be the eighth Rector of Saint Michael and All Angels in June, 2016 and started his ministry at Saint Michael on August 15, 2016.

Previously, Chris served as Rector of Calvary Episcopal Church in downtown Memphis, Tennessee, a position he had held since 2012. Prior to becoming rector at Calvary, he was Associate Rector at St. Luke’s in Birmingham from 2008 – 2012, and as a seminarian served at The National Cathedral in Washington, D.C., and at St. John’s in Chevy Chase, MD.

Chris is a native of Florida, a classically trained musician, and an amateur cook. He and his wife, Nicole, have three children; Brayden, Layna, and Annemarie.

If you would like information on how to keep the conversation going in the future, email us here!